The Spencer-Davis’s return with a quick-fire #1, barely three months after the first. It’s not a record that rings a bell but, as soon as I press play, I know I’ve heard this before, somewhere, sometime…

Somebody Help Me, by The Spencer Davis Group (their 2nd and final #1)

Like ‘Keep on Running’, it all kicks off with a bass riff. But one a bit mellower, a bit more understated, and not quite as filthy sounding as in their first chart-topper. Somebody help me, yeah… Somebody help me, now… Won’t somebody tell me what I’ve done wrong…

It’s a song that tells a bit of a story. The singer had a girl, his Queen, back when he was seventeen, but lost her. Since then he’s been unable to find a new one. Now I’m so lonesome, On my own… (If the stalker-ish lyrics to ‘Keep on Running’ were anything to go by, it’s easy to guess why she dumped him.) And that’s about it. A simple enough rock ‘n’ roll record.

Like its predecessor, ‘Somebody Help Me’ has got a nice soulful vibe to it – especially in the bridge – in the I need a girl, To hold me tight… – plus I like the funky guitar licks at the end of the lines. The Spencer-Davis’s liked a crunchy guitar, which gives their songs quite a Kinks-y feel. And it’s the shortest chart-topper we’ve had in a long time, coming in at bang-on two minutes. Which is fine – there’s absolutely no need for this disc to be any longer. 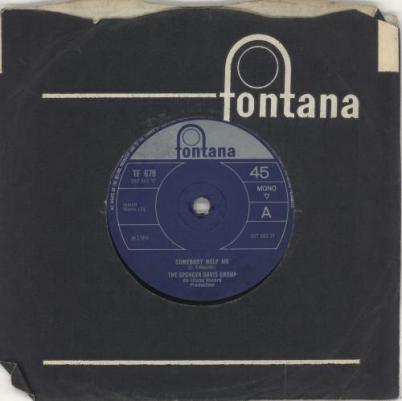 It’s a forgotten record, I’d say. A forgotten gem…? I’m not sure. Is it quite a ‘gem’? It’s definitely a groovy little record (we’re allowed to say ‘groovy’, by the way – it was the style of the time…) One that adds texture to the way Beat pop was splitting into different sub-genres. I’m not sure whether to go as far as calling it a ‘Shadow Number One’ – a song that only hits the top because of its more famous predecessor. Because A) it’s a good enough record to have reached the top on its own merits, and B) it managed a fortnight at the top while ‘Keep on Running’ only got a single week.

Interestingly, this song was, like ‘Keep on Running’, written by reggae singer Jackie Edwards. But he doesn’t seem to have ever recorded it. And, like so many bands of this era, The Spencer Davis Group didn’t last very long. They had a couple more Top 10s – including the classic ‘Gimme Some Lovin’, which is probably better known than either of their chart-toppers – before lead singer Steve Winwood left.

And that was all she wrote for the Spencer-Davis’s at the top of the UK Singles Chart.  They’ve reformed over the years in a variety of guises. Except… Winwood would go on to have a half-decent solo career, with a handful of eighties hits. One of which – ‘Valerie’, from 1982 – went on to be noticed by Swedish DJ Eric Prydz. He loved the vocals, persuaded Winwood to re-record them, and they formed the basis for his 2004 #1 ‘Call on Me’. So… we will hear the soulful tones of Winwood one more time in this countdown, in precisely thirty-eight years’ time. Aren’t the charts fascinating?