Our last entry in this mini-series takes us from the middle of the road hit-machine that was Norrie Paramor, to somebody slightly more niche.

Not that Robert George ‘Joe’ Meek didn’t have his moments in the spotlight; but his was a chart-career that favoured quantity over quality. The bold over the bland. Crazy over sane. Would one expect anything less from a man whose mother supposedly dressed him as a girl for the first four years of his life…? 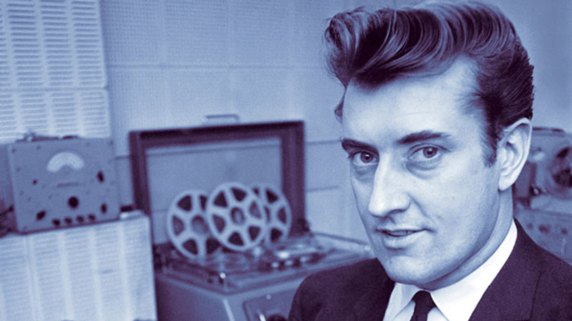 The achievements in his short career are many and varied – he recorded what was potentially the first ever rock opera, and pioneered the idea of independent record distribution – as well as making music that simply didn’t sound like anything else around at the time… There was overdubbing, distortion and sampling (more on which later…) He worked with big acts like Frankie Vaughan, Lonnie Donegan, Chris Barber’s Jazz Band, and a young Tom Jones. But this is the UK #1s blog and we are here, primarily, for the chart-toppers.

And what a trio of chart-toppers. First came the gothic ludicrousness of John Leyton’s ‘Johnny Remember Me’, in which a dead lover calls across the moors to her still-living beau, daring him to even think about forgetting her. Up last came ‘Have I The Right?’, by The Honeycombs, in which Merseybeat was fed through an electronic blender. And sandwiched in between, the perfect weird filling in a bizarre sandwich, sits The Tornado’s ‘Telstar’. I don’t have the time or space to give that record another write-up – just follow the link here for my original post or press play on the video below. Suffice to say that it is one of the very best chart-toppers that we’ve covered so far. Top five? Definitely. Top three? Probably.

‘Telstar’ sold five million copies around the world, topped the UK charts for five weeks and became only the second British chart-topper on the Billboard 100, a full year before the British Invasion truly kicked off. And it, like most of his hits, was recorded above a shop on the Holloway Road in North London. He used something called a Clavioline on the recording – a sort of proto-synthesiser – to create that alien-craft-hovering-right-above-you sound. But Meek wasn’t fussy, or a slave to technology; the ‘drums’ on ‘Have I the Right?’, for example, came from the band stamping on his stairs. 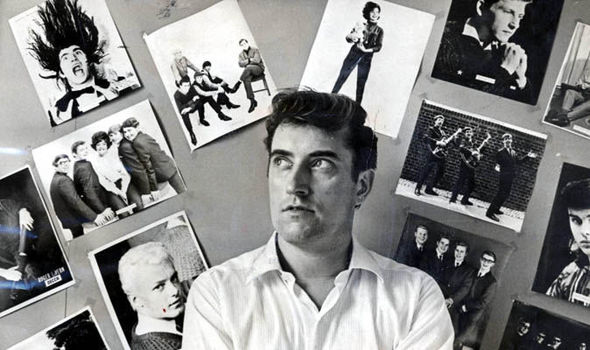 And as mad, zany and out-there as his hit records were, they can’t compare to Meek’s life story. This is a man who took recording equipment into graveyards to capture the voices of the dead, who held seances with Buddy Holly, who talked to cats, who thought that the photographs in his studio were trying to communicate with him… It’s perhaps not surprising that some found him a little difficult to work with… Meek was a man, it seems, who knew what he liked. He turned down the chance to work with a young David Bowie, and tried to persuade Brian Epstein not to sign The Beatles. He allegedly ran screaming, with his fingers in his ears, from a 16-year old Rod Stewart the second he began to sing…

Which all sounds perfectly absurd and entertaining; but it’s probably not fair to make light of it. Meek had serious troubles with addiction and paranoia in the later years of his life, stemming largely from the fact that he was gay and feared being outed. He was arrested for ‘immoral acts’ in a public toilet in 1963, which signalled the start of his downward spiral. Somewhat touchingly, it seems that he feared being outed to his mother much more than the general public…

On top of this, he faced lawsuits from one his main collaborators over exactly who wrote ‘Have I The Right?’, and from a French composer for the melody from ‘Telstar’ (which meant he never received a single royalty cheque for his biggest hit.) Meek was, in all honesty, a bit of a musical magpie, and seems not to have had much regard for licensing and copyright. He was above all those prosaic concerns – a true artiste. A one-off. No constraints, no boundaries. Which is why he could create a record as ahead of the curve as ‘Telstar’.

But it’s also why, when he heard rumours that every ‘known homosexual’ in London was going to be interviewed over the murder of a young man, a paranoid and desperate Meek shot himself and his innocent landlady. It was 1967 – he was just thirty-seven. He had had nothing to do with the murder, he simple feared the notoriety and possible prison sentence that came with being gay in the sixties. It’s tragic, given that five years later Bowie was dressing up as Ziggy Stardust on Top of The Pops, and that barely fifteen years later Frankie were saying ‘Relax’. Meek was born just that little bit too early.

He died on 3rd February, the same day as his idol, Buddy Holly, and his ghost can still be heard banging about in his old recording studio every year on that date, if you believe in that sort of thing. I’m including the videos for his three chart-toppers below – knock yourselves out – and would recommend Darryl W. Bullock’s book ‘David Bowie Made Me Gay’, in which I first read about unhinged genius of Joe Meek.

We’ve covered 210 chart-toppers so far in this countdown, going from the very first chart through to Nancy Sinatra and her boots in early 1966. And it’s only fair that we turn our attention to the man that, up to now, has been involved in more of these #1 singles than anybody else, more than Lennon and McCartney, Jagger and Richards, Bacharach and David…! Norrie Paramor.

Born in 1913, Paramor had worked as a pianist and arranger through the thirties and forties, before being appointed recording director at EMI in 1952 – the very year that the singles chart he was to help shape began. Having developed his sound during the light-programme, easy listening days, Paramor was perfectly positioned to help the pre-rock stars sway (albeit gently). He was responsible for trumpeter Eddie Calvert’s hits, and the Northern-Irish warbler Ruby Murray’s ‘Softly, Softly’. Then there was Michael Holliday. Already a pretty impressive body of chart-topping work… And it was about to become all the more impressive, because along came Cliff.

Cliff Richard has had eight number ones so far in our countdown, all of which have been produced by Norrie Paramor. And each time I’ve complained that ‘rock ‘n’ roll Cliff’ was nowhere to be seen… Britain’s answer to Elvis etc. etc. Yeah right. He had a handful of truly rocking singles in ’58, but by the time he’d gotten down to the business of topping the charts the rock had become more of a gentle toe-tap. And a lot of that was probably down to Paramor. He wasn’t a rock ‘n’ roll producer; he was a light-entertainment, easy listening kind of guy. I get the feeling he wasn’t convinced by rock and roll, probably saw it as a fad, and was willing to allow it as long as it was successful. Still, he moulded Cliff’s sound. One wonders how Cliff would have turned out had he had someone else’s hands on the tiller…

(An early pic of Paramor, Cliff and The Shadows)

Of course, wherever Cliff went The Shadows weren’t far off. Paramor produced all of their chart-toppers too. Which makes for a more interesting comparison of styles, as discs like ‘Kon-Tiki’ and ‘Dance On!’ were actually pretty rocking little numbers. Perhaps it’s unfair, then, to write Paramor off as a dinosaur. Add to this the fact that he also oversaw Helen Shapiro’s wonderful 1961 chart-topping double – the bubbly ‘Walkin’ Back to Happiness’ and the melodramatic ‘You Don’t Know’ – and it’s clear that he wasn’t all bad… 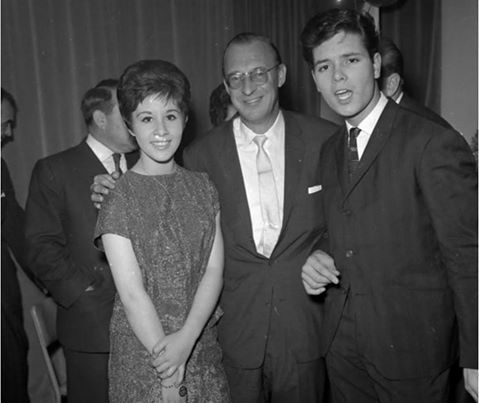 (Paramor with Cliff, again, and Helen Shapiro in the early sixties)

Wait, though… On the flip side of this particular coin lies one Frank Ifield. Yep, Norrie Paramor produced all four #1s from ‘The Year of Ifield’, pre-rock’s final hurrah before The Beatles and The Pacemakers saved us all… The yodelling horror that is ‘Lovesick Blues’ remains, for me, far worse than anything that Cliff has inflicted.

A mixed bag, then, from Norrie Paramor, prolific producer of the chart’s early years. In total (I think, it’s hard to keep track) he put his name to around twenty five chart-topping singles before the seventies arrived. He also acted as musical director for the Eurovision Song Contest, and wrote multiple film scores, before passing away in 1979. And, in a sentimental twist, the artist that was sitting at #1 in the UK as Paramor drew his final breath, with his first chart-topper in over a decade, was… Cliff!

Taking a break from the usual proceedings, I’m going to use this week to take a look at the folks behind some of the 210 #1s we’ve heard so far. The writers, the producers and, in the case of our first post, the conductors…

In the early days of the charts, when big productions and even bigger voices were all the rage, any self-respecting chart-topper needed an orchestra to back up them up. On the 45s of the time, nearly every #1 is assigned to both a lead artist and an orchestra. ‘Here in My Heart’, by Al Martino, with Orchestra under the direction of Monty Kelly… ‘Outside of Heaven’, by Eddie Fisher with Hugo Winterhalter’s Orchestra and Chorus… 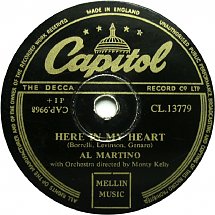 Perhaps for reasons of convenience, the Official Singles Chart don’t list the orchestra, or it’s conductor, for any of the early chart-toppers. Which is strange, I suppose, as in modern times we have no problem with crediting ‘featured’ artists on a dance or rap track. Maybe it’s because we don’t actually hear their voices… Whatever the reason, several men have missed out on their moment in the record books. Winterhalter and Kelly, Frank Cordell, Stanley Black, Harold Mooney, Mitch Miller… 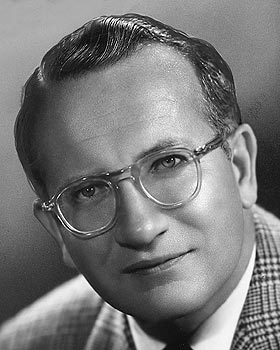 I’ve chosen Paul Weston as the frontman for this piece, though, thanks largely to his work with Frankie Laine. Weston was a Massachusetts born musician, who had been a pianist in a dance band, before becoming a song-writer and music director at Capital, and then Colombia Records. He conducted and arranged all three of Laine’s 1953 hits: ‘I Believe’ (still the song with the most weeks at #1 in the UK, sixty-five years on), ‘Hey Joe!’ and ‘Answer Me’. He also conducted on Jo Stafford’s ‘You Belong to Me’, Britain’s 2nd  ever chart-topper. Stafford and Weston had married not long before recording the song.

If Paul Weston were actually credited with his work on #1 singles, he would sit at joint 10th place in the all-time weeks at the top of the UK singles chart list with 29 weeks’ worth of chart-toppers, tied with ABBA and Take That, and one week behind Drake. Later in the 1950s he went on to do TV work, helped to start up the Grammy Awards, and worked for Disney. He passed away in the mid-nineties.

One conductor who did get credited on his hit records was the Italian, Annunzio Paulo Mantovani who, like all the best pop stars, went by just the one name: Mantovani. He was popular enough to score a solo, instrumental number one single in 1953: The Song from ‘The Moulin Rouge’, which had been a big hit in the cinemas that year. This success, and his subsequent fame is, I’m guessing, why he is the only conductor to be credited by the Official Charts Company, for his orchestral accompaniment on David Whitfield’s overwrought ‘Cara Mia’ in 1954. 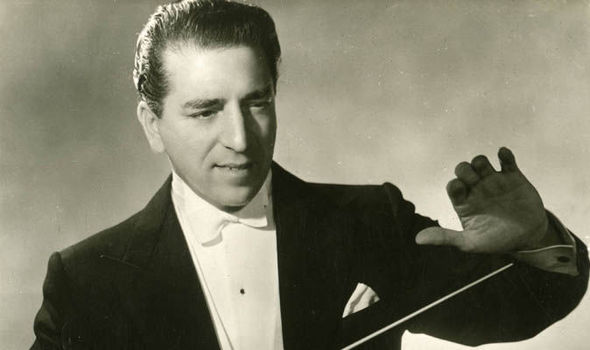 Conductors and their orchestras became less essential once rock ‘n’ roll arrived, but they still occasionally popped up on the more bombastic number ones. The last one I can think of was Shirley Bassey’s ‘Climb Ev’ry Mountain’ / ‘Reach for the Stars’ double-‘A’ side from 1961, which was credited, on the vinyl at least, to Geoff Love and His Orchestra.

To the conductors, then, and their batons, which shaped the sound of the singles chart’s earliest years.