The charts of spring/summer 1962 have proven to be a little schizophrenic… We’ve veered from the safe ‘Wonderful Land’ to the zany ‘Nut Rocker’ to the bland ‘Good Luck Charm’, and now to this. How to describe this latest #1? This… This is a ‘Carry On…’ film distilled into a two and a half minute pop song. 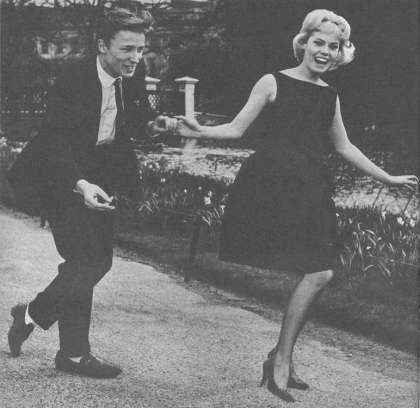 Come Outside, by Mike Sarne with Wendy Richard (their 1st and only #1s)

Mike Sarne is at a dance with his girl. She wants to keep dancing; he wants to get her outside for a spot of you-know-what. Little doll, We’ve been jivin’ all night long, Little doll, got a feelin’ something’s wrong, Cause it ain’t right to wanna keep on dancin’, There won’t be any time left, For romancin’… The chords are copy-paste rock ‘n’ roll, the backing singers straight out of a Neil Sedaka number.

It’s a novelty record; but it’s a very listenable novelty record. That’s one thing worthy of noting: so far all the ‘silly’ chart-toppers have still had a high level of musicianship and song-writing go into them. From ‘That Doggie in the Window’, to ‘Hoots Mon!’ to the aforementioned ‘Nut Rocker’ – they may have been at various points irritating, cloying and/or twee, but they were all still produced with the same level of skill and attention as a ‘straight’ hit single. Whereas, growing up as a child of the nineties, ‘novelty’ songs meant cheap and nasty tracks like ‘Mr Blobby’, ‘Bob the Builder’ and the ‘Crazy Frog’.

So, I wonder when we’ll have our first truly bad novelty chart-topper. ‘Come Outside’ certainly isn’t it. This is a loving pastiche of all that’s great about rock ‘n’ roll music, with a very British twist. You can tell that Sarne isn’t a natural born singer, yet he tries his best, plays it straight, and I love his sub-cockney accent. Richard, his co-star, doesn’t sing any lines herself – she’s there to voice her objections to his advances. ‘Vocal interjections’ are, I believe, the technical term… Sarne: Come outside… Richard: What for? S: Come outside… R: What’s the rush? S: There’s a lovely moon out there… R: It’s cold outside… 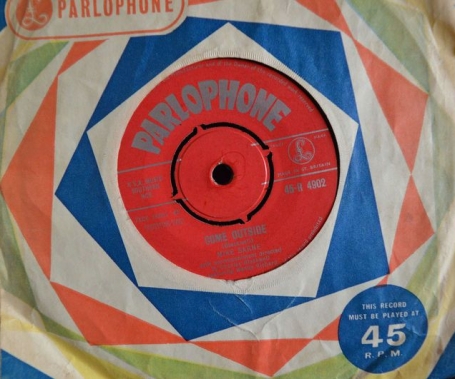 This is a linguistic time-capsule of a record. When Richard shouts ‘Belt up!’ and ‘Give over!’, it suddenly sounds very old-fashioned, and I’m pretty sure that nobody has referred to ‘slap and tickle’ for at least thirty years. Plus, the reason that Sarne is so desperate to get his bird outside is because he’s promised her old man to have her home ‘bout  half past ten, which is peak-1962. By the final chorus Sarne has gotten very insistent – perhaps a little too insistent to these post-#metoo ears – causing Richard to shout ‘Lay off!’ and ‘Stop shoving!’. But, to be fair, she sounds like she could take care of herself, and come the end she’s given in very easily: Come outside… You are a one… Come outside… Oh all right… Come outside… Not for too long… The fade-out, in which the couple make their way out of the dancehall, bickering about how he needs a shave, is the high point of the whole disc.

Mike Sarne had a handful of minor hits in the UK, none of which came close to matching this debut. He went into acting, presenting and directing. Wendy Richard went on to become one of the most recognisable actresses on British television, starring in ‘Are You Being Served?’ (a show every bit as silly and camp as this song) and, of course, in ‘EastEnders’ for twenty-odd years. She died in 2009.

While I do like this record on its own merits; it also reminds me of lazy, hazy Saturday mornings a decade or so ago listening to ‘Sounds of the Sixties’ on Radio 2. My radio alarm would wake me to the voice of the late, great Brian Matthew – a voice, rich and syrupy, that I would happily have paid to hear read the phone-book. It was on one such morning that I heard ‘Come Outside’ for the first time, and it’s had a spot on my playlists ever since.