The Searchers complete their hat-trick of #1s, with a very ‘Searchers’ record. Light as a feather guitar, restrained vocals, a hint of melancholy… Check, check, check. 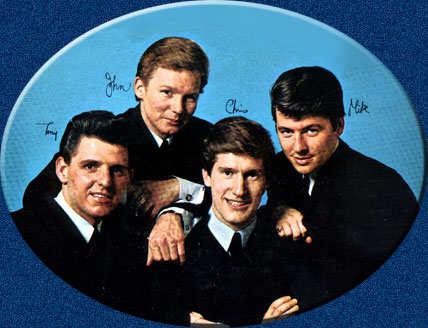 Don’t Throw Your Love Away, by The Searchers (their 3rd and final #1)

If The Beatles were the popular kids, and Gerry & The Pacemakers the class clowns, The Searchers were the cool kids in the corner, planning out their next, more grown-up, hit record. ‘Don’t Throw Your Love Away’ is the sort of record your gran wouldn’t have minded; but she would definitely have told you to turn off The Dave Clark Five.

It’s another Beat-pop song with a less-than-positive message. A song about a man who has been burned in the past, and who now sits at the end of the bar doling out advice to anyone who’ll listen. Lovers of today, Just throw their dreams away, And play at love… They give their love away, To anyone who’ll say, I love you… He doesn’t refer to himself specifically; but you just know he’s had his heart broken. Don’t throw your love away… he counsels… For you, Might need it, Someday…

When I first listened to this record a few days ago – a record I was aware of but had never really listened to properly – I noted that I ‘couldn’t really get into it’, that it was a little bland and uninventive. I even jotted down the phrase ‘Landfill Merseybeat’, meaning it in the same way that anyone who wasn’t The Arctic Monkeys, Franz Ferdinand or The Libertines in 2006 was ‘Landfill Indie’. But I’d like to officially change my mind, having listened to it on repeat, and admit that what I mistook for a bland number is actually a very subtle song that simply takes a while to fully reveal itself. The vocal harmonies are cute, and the guitars chime very tightly (I especially like the little ‘Arabian Nights’ fill in the bridge.)

And all credit to The Searchers, for not chasing the ‘Yeah Yeah Yeahs’ of other Beat songs, for ploughing their own furrow and taking this forgotten little slice of sad-pop to number one. This is a very ‘Searchers’ record; and if that means it’s a little hard to get into at first, then fine. I think part of the reason I didn’t get into their first chart-topper, ‘Sweets For My Sweet’, is that that was a song that really needed an up-tempo, grinning approach, which The Searchers couldn’t provide.

That’s not to say that they couldn’t do better than ‘Don’t Throw Your Love Away’. ‘Needles and Pins’ stands out clearly as the best of their three #1s, if not one of the best Merseybeat records, period. And their next single but one, the brilliant ‘When You Walk Into the Room’, would have made an even better final chart-topper for the group. It only reached number three…

I really could just cut and paste this next sentence… The Searchers (as with Gerry & The P’s, Billy J, Peter & Gordon et al) couldn’t keep the hits going much longer than this. Their final Top 20 hit came in 1965. Perhaps their biggest problem was that they didn’t write their own hits – all their #1s were covers (‘Don’t Throw Your Love Away’ was originally released, in the US at least, by The Orlons.) In the fifties that would have been fine, but all of a sudden, it seems, acts – especially guitar bands – needed to be writing their own stuff. They tried to move with the times, covering songs by The Stones and The Hollies, but nothing stuck. The line-up changed at an alarming rate, and they now tour as both Mike Pender’s Searchers and the ‘original’ group. But, we can remember them fondly as the band who gave us a breather, with their wistful melodies and hesitant vocals, from the relentless march of the Beat revolution.