With Beatlemania at its scream-until-you-vomit height, it should come as no surprise to learn that one Fab Four song is replacing another at the top of the charts. Except, one glance at the act involved in this latest #1 gives the game away… There was neither a Peter nor a Gordon in The Beatles. 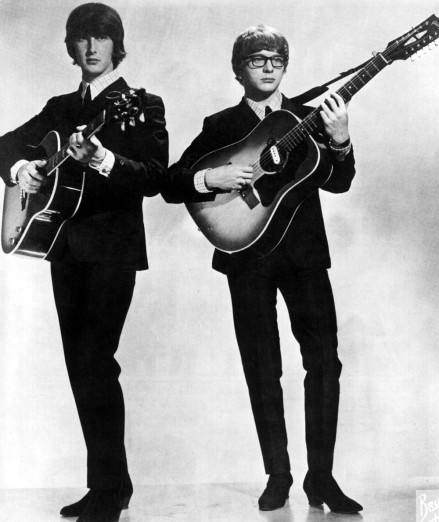 For those keeping track, this is the 6th Lennon & McCartney composition to take the top spot in the UK: four recorded by The Beatles themselves; two covered by other artists. But even if you hadn’t been filled in beforehand, the second the needle drops on ‘A World Without Love’ you know it’s a L&M number.

Is it the chord progressions? The harmonies? The fact it’s a catchy song with a sad underbelly? Is it all those things; or none? I can’t put my finger on it – but it’s there throughout the song. That Lennon & McCartney fairy dust. At the same time, though, this disc doesn’t sound exactly like a Beatles’ number. They were still, at this point, a guitars and drums pop group; while this record is driven by a bass riff and an organ.

The voices are different too – softer, more Everly Brothers than Beatles. They’re nice, drenched in echo… Please, lock me away… And don’t allow the day… Here inside, Where I hide, With my loneliness… It’s a song about how awful the world looks after a break-up. And this particular break-up must have hit pretty darn hard… Birds sing out of tune, And rainclouds hide the moon… By the end, the duo are begging to be locked away, hidden from all, rather than staying in a world without love.

I’ve mentioned it before, but it is surprising just how melancholy and melodramatic some of these Beat #1s were. You think it’s all youthful exuberance and ‘Yeah Yeah Yeahs’, but when you sit down and listen intently you notice that songs like ‘Bad to Me’, ‘She Loves You’ and ‘Needles and Pins’ are more concerned with the downsides of love, and that it’s not all sweetness and light. Apparently this song was written by Paul McCartney aged just sixteen, and that makes complete sense. That line about ‘hiding with his loneliness’ is pure teen-angst; while the bridge – in which it is revealed that the singer still holds out hope of his beloved returning to him – is pure youthful optimism. Although the line When she does (come back) I lose… adds an ambiguous element into the mix. Does he want her to come back? Or is he enjoying his gloomy wallow a little too much?

Peter Asher and Gordon Waller were school friends, and ‘A World Without Love’ was their debut hit. Asher was the brother of Paul McCartney’s girlfriend, Jane, and actually shared a room with Paul when he first moved to London, hence how he got to know him and was allowed to ‘borrow’ one of his songs. All the duo’s biggest hits were covers – ‘True Love Ways’ and a version of ‘To Know Him Is To Love Him’ followed – before, as with so many of the bands that broke through in the Beat explosion, their careers crumbled circa 1966/67.

McCartney was honest enough to admit that he thought ‘A World Without Love’ wasn’t good enough for his own band, and so they never recorded so much as a demo of it. I think that’s a little harsh – it’s a neat slice of pop that’s the equal of many Beatles’ album tracks. But I also get what he means. Nothing here matches the euphoric rush of ‘She Loves You’ or the guitar on ‘I Want to Hold Your Hand’. They may have had cute hairstyles and cheeky grins, but The Beatles, and Lennon & McCartney in particular, knew what they were doing, taking control of their careers from the off.