This week marks the 1st anniversary of The UK Number 1s Blog (** Trumpet Fanfare**)! In the past year we’ve covered the period from Nov. ’52 to Nov’ 61, with 129 chart-topping songs featured. We’ve survived pre-rock, rode the rock ‘n’ roll revolution, and are now well on our way towards the swinging sixties… Thanks to everyone who has read, followed, commented and enjoyed.

To celebrate this milestone, I’m going to take a short break from the usual countdown to repost seven songs that I have really enjoyed discovering over the past year. These aren’t necessarily the best songs to have topped the charts – there’ll be no Buddy Holly, Johnnie Ray, Connie Francis, Elvis or The Everly Brothers (follow the links if you want to read about them) – as I’ve been listening to, and loving, those artists for years. This week will be all about the forgotten gems, the hits I’d never heard before, the songs that have slipped through the cracks…

Next up is Perry Como, with ‘Don’t Let the Stars Get in Your Eyes’ – another song that surprised me with its upbeat tempo (and funky trumpet solo). And like Kay Starr, he was another artist with enough about him to make it out of the pre-rock age alive…

Don’t Let the Stars Get in Your Eyes, by Perry Como with the Ramblers (Como’s 1st of two #1s)

One of my biggest chart bugbears, back when I started chart-watching, was one-week number ones. In the late ’90s and early ’00s it seemed like there were a never ending parade of songs waiting to shoot straight in at number one, only to be replaced by another brand new song a week later, as if record companies had worked it all out beforehand in some sort of dastardly pact. And I assumed that it never used to be that way, that ye olden charts were creaky, slow moving things where records languished at the top for weeks and months. Which is true to an extent – Al Martino had nine weeks, and wasn’t alone in having that length of stay, while later in 1953 we’ll reach the song which still holds the record for most weeks at number one…

But what we have here is a fourth new chart topper in as many weeks. It turns out that the record buying public of the pre-rock era were just as fickle as those in 1999! Perry Como, though, did halt the turnover and kept this jaunty little tune at the top for a month and a bit. That’s star quality shining through.

This track is a welcome relief after its overwrought predecessor. Perky guitars, a lively brass section, and tongue-twister lyrics: Love blooms at night in daylight it dies don’t let the stars get in your eyes or keep your heart from me for some day I’ll return and you know you’re the only one I’ll ever love delivered in just the one breath. This seems to have been a thing, a gimmick almost (at least it seems gimmicky to modern ears), as Kay Starr was at it in ‘Comes A-Long A-Love’. It’s not vocal gymnastics of the Mariah Carey kind; more lyrical gymnastics, if such a thing can exist.

We’ve also heard similar lyrics already in this countdown, in that Como is telling his sweetheart not to forget about them, or to stray, while away. The best bit of it all, though, is the trumpet solo. At least I think they’re trumpets; I really can’t tell one brass instrument from the other. Anyway, they put me in mind of the oompah band at a German Bierfest.

The one downside to the song is the backing singers, The Ramblers. They’re just a bit… barbershop, in that they are basically there to repeat verbatim the line that Como just sang. In case some one missed it? I don’t know. And their one bit of improvisation is to sing what sounds like pa-pa-papaya between lines. Are they imitating the trumpets? Is it just gibberish? Are they actually singing about papayas? 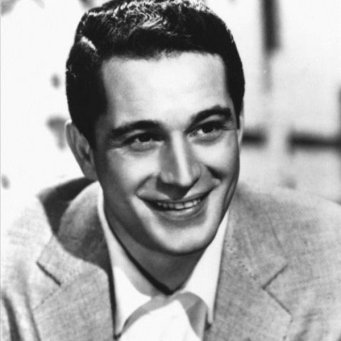 Perry Como (American! Died aged 88! The run continues!) is the biggest name to top the chart so far. I’d say, at least. Both of the female chart toppers were new to me, Al Martino was known to me solely as the singer of the first ever UK #1, and Eddie Fisher had entered my consciousness due to his ladykilling (the romantic type of ladykilling, that is). Perry Como was a big star and I could have named his biggest hit (‘Magic Moments’, fact fans) without looking it up. And after looking up his discography it’s clear that if the the charts had begun earlier he would have racked up a load more hits – he was scoring US #1s throughout the ’40s. Now, in 2018, he’s no longer a household name, a Sinatra or Presley, I wouldn’t have thought. Very few of these stars from sixty-odd years ago are, I suppose.

3 thoughts on “‘Don’t Let the Stars Get in Your Eyes’, by Perry Como with The Ramblers – The UK Number 1s Blog Anniversary Special”