Back for one final fling at the top of the charts folks – live from the glamorous Gaumont Cinema, Doncaster – please welcome… the one and only… Lonnie!… DONEGAN!!!

My Old Man’s a Dustman, by Lonnie Donegan (his 3rd and final #1)

I had my doubts as to whether either of his previous #1s were ‘live’, as they sounded like studio recordings with some applause tacked on the end, but this is certainly the real deal. The audience are truly involved here, whooping and clapping at the end of almost every line – in fact they start cheering before the song has even really begun.

Now here’s a little story, To tell it is a must, About an unsung hero, Who moves away yer dust… Donegan tickles his guitar, as he introduces the tale of his father and then launches into some famous lines: Oh my ol’ man’s a dustman, He wears a dustman’s hat, He wears cor blimey trousers, And lives in a council flat… This is a very British number one, perhaps the most home-grown, wink-wink, nudge-nudge, how’s yer father, oo-er missus number one yet. For the benefit of non-British readers then: a ‘dustman’ is a rubbish collector, a ‘council flat’ is government built and owned housing for lower-income tenants, and ‘cor blimey trousers’ are… quick check, as even I’m not that up on old-fashioned Britishisms and was born far from the Bow Bells… old trousers unfit for wearing, possibly with a big rip across the arse.

The song bounces along, while Lonnie paints colourful scenes from his father’s life as a binman. I’ll pick out just one, shall I? Now one day whilst in a hurry, He missed a lady’s bin, He hadn’t gone but a few yards, When she chased after him, ‘What game do you think you’re playing?’, She cried right from the heart, ‘You’ve missed me am I too late?’, ‘No, jump up on the cart!’ (Cue riotous laughter)

I know I’ve had a good moan in the past about British chart-toppers being silly and uncool compared to those recorded in the US. But that would be a somewhat snide and petty thing to bring up here. This is pure east-end music hall: silly jokes, accents and innuendo a-plenty. (Apparently it upset the hardcore skiffle fans of the time that their hero would stoop to recording this silly mush). I don’t find it terribly funny myself – though that one about the mushroom did take me a couple of listens to get and made me chuckle when I did – but then I’m a cynical millennial whose coming to this record sixty years too late. The song ends to rapturous applause, and it did spend a month atop the charts – so plenty of folks enjoyed it, and presumably still do. 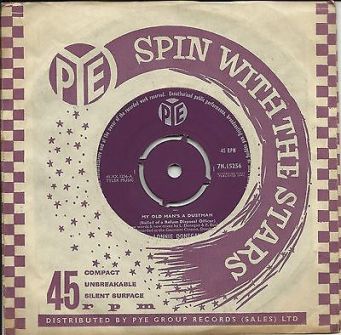 This, following hot on the heels of ‘Running Bear’, means we’ve had two novelty #1s in a row. They’re pretty easy to write about, good for a quote or two, but they don’t reveal much about where popular music was at the time of their release. ‘My Old Man’s a Dustman’ (‘Ballad of a Refuse Disposal Officer’ – to give it its full title) could have been written in 1910, for example. (It wasn’t – but the lyrics do have their origins in the 1st World War trenches.) Looking down the list, normal service at the top of the charts will resume very soon – rock ‘n’ roll ditties about falling in and out love. And maybe we’ll grow bored of that and look back fondly on these novelty number ones from the spring of 1960. Who knows?

One more thing – the line at the start of the song about the singer’s dad being ‘flippin’ skint’ is the by far closest we’ve come to hearing a swear-word in this countdown – ‘flipping’ being a very PG version of ‘fucking’, kind of like ‘freaking’ in American English but probably even milder. And it got me wondering when and what the first ever #1 to feature genuinely foul-language will be? I know all sorts of facts about the UK’s chart-toppers – longest, shortest, most weeks at the top, longest climb to the top, highest selling, lowest selling – but not that…

Lonnie Donegan bows out here. His 3rd and final chart-topper being his biggest – his signature? – hit. But it’s far from being his best. That was the punky, gonzo, gloriously messy ‘Cumberland Gap’. Donegan was a regular visitor to the top ten between 1956 and ’62, and did a lot to inspire the wave of British guitar acts that are set to explode on both sides of the Atlantic in a few years’ time. Meanwhile, his Wiki page introduces him as both ‘The King of Skiffle’ and ‘Britain’s most successful and influential recording artist before The Beatles’. A pretty decent bunch of ways to be remembered, eh?