‘Pop Music’… an ultra-generic term, but hey… What’s the first thing that pops (gettit?) into your head when you hear that term? Feel-good, catchy hits. Bubble-gum and bright colours. Popular songs that sell loads of copies. And yet, many, if not most, pop songs are more complex than that. Look at the songs to have hit #1 in 1964, and you’ll find a lot of bittersweet emotion: ‘Needles and Pins’, ‘Anyone Who Had a Heart’, ‘A World Without Love’, two songs titled ‘It’s Over’ and ‘It’s All Over Now’. Plus a song about a boy driven to ruin in a gambling den-slash-whorehouse. Only one – ‘Glad All Over’ – could potentially have filled all the ‘feel-good, catchy, bubblegum’ criteria this year so far. Make that two, now.

Do Wah Diddy Diddy, by Manfred Mann (their 1st of three #1s)

There she was, Just a-walkin’ down the street, Singin’… Do wah diddy diddy dum diddy doo…! I forgot to add one more requirement to the ‘Pop Music’ manifesto – a memorable hook. And has there ever been a more memorable hook than Do wah diddy diddy dum diddy doo? Add it to the wopbopaloomas, the ramalamadingdongs and the zig-ah-zig-ahs of pop lore. As usual, I took a pre-post listen to this song, and tried to jot down some notes. But I found I didn’t write very much. I was too busy enjoying what is a great little pop song.

We come to a goofy call-and-response section: She looked good… (looked good…) She looked fine…( looked fine…) And I nearly lost my mind… And then it’s the bridge – another great bridge in an era of absolutely superb middle-eights. Woah-oh-woah, I knew we were falling in lo-o-o-ve… coupled with a twangy, rock ‘n’ roll throwback guitar. And we finish with, of course, a happy ending: with the loved-up couple together every single day, singing… You know exactly what they were singing: Do wah diddy diddy…

Musically, we can still hear the slow disintegration of the Merseybeat sound, now with organs, and maracas, and deep, bouncy, almost synthetic sounding drums. We’re approaching what I would think is peak-sixties, and this is a very sixties-sounding disc. And I’m looking at what I’ve written so far, and thinking it’s a pretty short post for a pretty high-quality song… But at the same time, ‘Do Wah Diddy Diddy’ is pretty close to pop perfection; and pop don’t need no analysing. That’s not really what pop music is for. 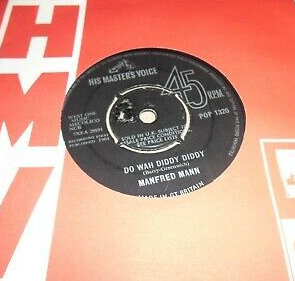 Plus, Manfred Mann will be chart staples for the entirety of the 1960s, managing what many of their Beat contemporaries couldn’t – to adapt their sound and score hits (including two more chart-toppers) all the way through to 1969. So I can’t even pad this post out with a career round-up.

This record made them the first non-Liverpudlian/Mancunian US chart-toppers during the British Invasion of 1964. In actual fact, though, ‘Do Wah Diddy Diddy’ was a cover. US girl group The Exciters had had a minor hit on the Billboard Hot 100 with it earlier in the year. Give that version a listen here. It’s a sign of the song’s strength, I’d say, that it works just as well in the hands of a female vocal group as it does in the hands of a raucous Beat-combo, and sounds as if it was originally written for them both. A stone-cold pop classic.