Singing the Blues, by Tommy Steele & The Steelmen (their 1st and only #1)

If there’s one thing I’ve learned from doing this countdown, from listening to all these number ones of old, it’s that the ‘pre-rock’ era is a very hard thing to pin down. What was it? What did it sound like? Who were its biggest stars? And… when did it end?

So, I’m about to stick my neck out and make a bold claim. Are you ready? The 11th January 1957 marks the end of the ‘pre-rock’ era and the beginning of the ‘rock n roll’ era. In the UK at least. I can’t speak for anywhere else.

Why the 11th January 1957? Well, it’s when one Tommy Steele and his band The Steelmen (see what he did there?) hit the top spot with their version of ‘Singing the Blues’. Steele was the UK’s first rock ‘n’ roller, the pre-Cliff Richard if you will, and he grabbed this song away from Guy Mitchell’s nice-enough-but-somewhat-bland version, gave it a good shake and a slap, and ushered in a new era.

Not that you’d notice straight away. The song starts with the same plinky-plonky guitar and the same twee ba bum bum bums from the backing singers. And the trumpets and hand claps added to this version give it a slightly camp, Butlins-esque air. No, the one thing that makes this record rock is Steele himself: We-hell.. a-never felt…m’re like singin’ the blues… cos I never thought Ivrlose… yr love… dear…

I’m not having a fit as I type – that’s really how he sings: like the last old man crawling out the pub. He’s slurring. He goes quiet, then loud, then quick, then slow. He sounds snotty, and bratty. When he delivers the lines The moon and stars no longer shine… The dream is gone I thought was mine… There’s nothin’ left for me t’ do, than cry-y-y OVER YEEW he starts off sounding quite posh and proper but ends the lines dripping in insincerity. He sounds like he’s taking the piss. You can picture him sneering and gyrating. It’s a world away from previous British male chart-toppers like David Whitfield, even Dickie Valentine. I don’t think it’s too much of a leap to say he sounds like a cross between David Bowie and Johnny Rotten. Seriously. 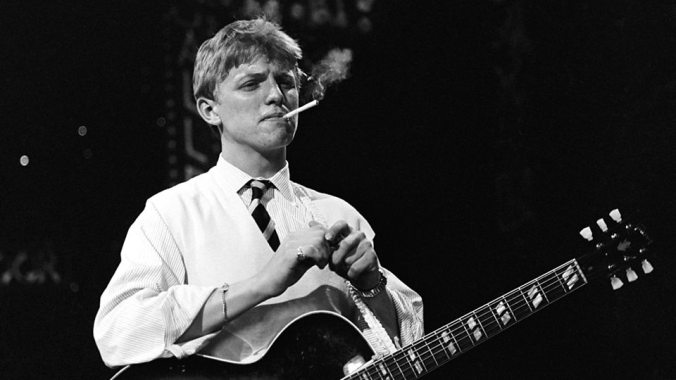 And had I been a fifteen-year-old girl – Susan, let’s call me – sitting in the gloom and cold of January 1957, my heart would have gone a-flutter when this record dropped onto the turntable. Steele sounds like a bad boy; the sort that flicks ink-blots at the teacher and smokes behind the gym. He sounds much younger than Guy Mitchell while singing the same lyrics (Steele was twenty, Mitchell was thirty when they had their turns at #1) Susan’s mum would definitely have preferred Mitchell’s version. Her dad would probably have grumbled something about Steele needing a good stint in the army.

And so that’s it. In the two minutes twenty seconds it takes Tommy Steele to rattle through his version of ‘Singing the Blues’, we cross the Rubicon. There’s no going back from here. Steele’s star shone brightly and briefly – we won’t be hearing from him again beyond this solitary week at the top – but he did what he had to do, and changed the face of British popular music forever.

14 thoughts on “54. ‘Singing the Blues’, by Tommy Steele and The Steelmen”