A few weeks after bidding The Beatles farewell, we’ve now reached the end of The Rolling Stones’ chart-topping career.

Honky Tonk Women, by The Rolling Stones (their 8th and final #1)

But, while The Fab Four bowed out with a not-very-Beatles-sounding #1, The Stones wrap things up by doing what they do best – some low-down, dirty rhythm and blues. It starts with a cow-bell, Charlie’s drums, some filthy guitar licks, and Mick’s drawl: I met a gin-soaked bar-room queen in Memphis… (was there ever a more Stonesy opening line than that?) She tried to take me upstairs for a ride…

In my post on their last #1, I wrote that ‘Jumpin’ Jack Flash’ was a new leaf for The Stones, in that they gave up on their attempts at flower-power and psychedelica, and returned to straight-up rock ‘n’ roll. ‘Honky Tonk Women’, then, is a consolidation of that. It sets the template for the next fifty years of the band, through the twin glories of ‘Sticky Fingers’ and ‘Exile on Main St’, through to them becoming the biggest stadium fillers the world has ever seen.

It’s also, basically, Mick Jagger listing women that he’s shagged. The bar-room queen is followed by a divorcee in New York City, and the outrageous She blew my nose and then she blew my mind… line. Goodness. It’s the ho-o-o-onky tonk women, Gimme, gimme, gimme the honky tonk blues… It’s always easy to forget that Mick and Keith were from Dartford, Kent and not Tennessee or Alabama, such is the Americana that fills some of their biggest hits.

There is an elephant in the room, though. This is the first Stones’ single not to feature founding member Brian Jones, whose slow and acrimonious departure from the band had been confirmed earlier in the year. He was found dead in his swimming pool just three weeks before ‘Honky Tonk Women’ hit #1. A blues purist; we can but wonder if this song would have sounded different with him playing on it. 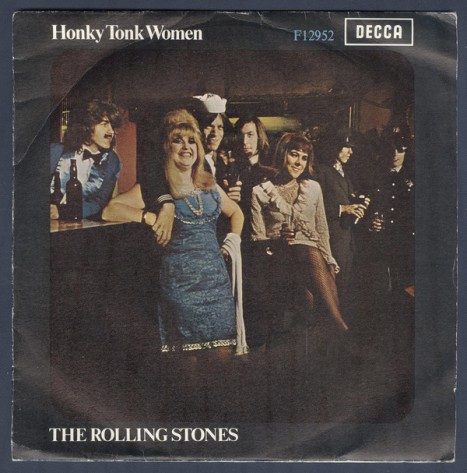 Who knows? As it stands we get a sax solo, and a punch the air Woooo! at the very end. It must have been a fun song to write, to record, and to perform every night for the past half-century. I love it. A pure, unadulterated blast of rock ‘n’ roll. You can hear the seventies hits-to-come buried in it – the likes of ‘Brown Sugar’, ‘Tumbling Dice’, ‘It’s Only Rock ‘n’ Roll’ and the like, right through to ‘Start Me Up’. Unfortunately, none of those records will reach top spot in the UK. The Rolling Stones bow out on eight.

Impressively, their final chart-topper gave them their longest run at number one. Quite unusual, that. Though the particularly eagle-eyed among you will notice that 23rd July to 24th August isn’t quite the five-weeks advertised. This is due to the chart publication dates, and collation methods, changing in the midst of ‘Honky Tonk Women’s’ run.

Farewell to The Rolling Stones, then. Without them and The Beatles around to hit #1 every few weeks it leaves a lot of room for some new guys to come along and dominate. The Stones would slowly fade into obscurity as their chart-topping days receded into the distance… Only joking! They remain a going concern – give or take a few changes in line-up – well into their seventies, while Keith Richards’ continued existence remains one of life’s great mysteries… Their most recent album ‘Blue and Lonesome’, even hit #1 in the UK in 2016.

I’ll maybe do a Stones Top 10 soon, covering all their UK singles, but just for fun here’s my ranking of their eight British chart-toppers – based completely on personal preference – from ‘worst’ to best. *Clears throat*:

Let me know if you agree, or not.

Listen to every number one, including all eight from The Stones, here: