After our Dusty Springfield extravaganza last time out, we’re back with something a little more routine. A little more of its time. Guitars, drums and a husky-voiced man. 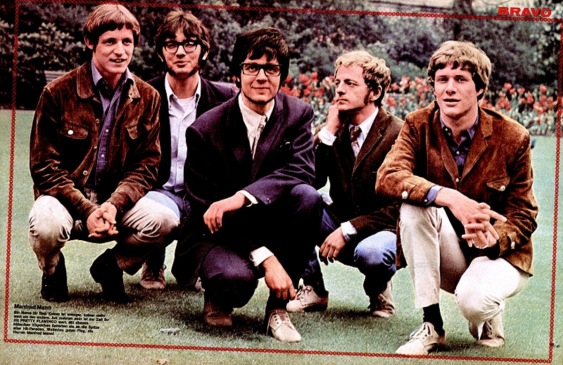 Pretty Flamingo, by Manfred Mann (their 2nd of three #1s)

It’s got an intro that has always reminded me of Bob Dylan’s ‘Like a Rolling Stone’, in the way that the bass and the drums roll in, after a couple of guitar chords. It’s a song that I’ve known for quite a while, a perennial of the ‘Best of The Sixties’ tapes and CDs that accompanied long car journeys with my family. And it’s a song I’ve always liked: it’s sunny, breezy, poppy… A song that gives you a pleasant two and a half minutes; but that doesn’t linger too long afterwards.

Manfred Mann have grown up since ‘Do Wah Diddy Diddy’ gave them their first chart-topper nearly two years back. It’s a more mature sound, more laidback and a tiny bit trippy. And, though I described singer Paul Jones’s voice as husky in the intro – it’s not a regular kind of husky. It’s nasally, and a bit rough. An acquired taste. The opening line hits you: On our block, All of the guys call her flamingo… This was one of Jones’s final recordings with the Mann’s – he would leave a couple of months later.

And actually, thinking about it more closely, is calling a girl a ‘flamingo’ that much of a compliment? It kind of suggests you have scrawny legs and a big beak… Or, rather, according to the lyric, it’s: ‘Cos her hair glows like the sun, And her eyes can light the skies… I’m still not convinced. When she walks, She moves so fine, Like a flamingo… (Flamingos are lanky and walk with an old man stoop. I doubt the songwriter had ever actually seen a flamingo…) 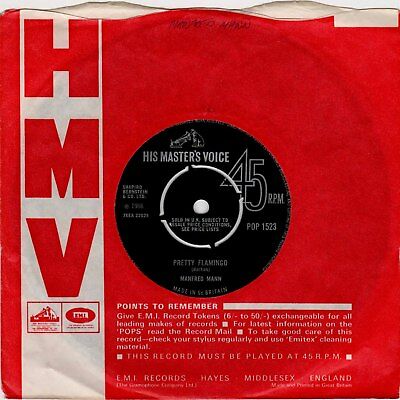 All lyrical inconsistencies are forgiven, however, when we get to the bridge, which has a hook to die for: When she walks by, She brightens up the neighbourhood… And then we have what sounds like a flute solo, and some sha-la-las to wrap up, because it’s that kind of record. I also like the ‘Ha!’ after the If he just could… line, which suggests that deep down Jones knows it ain’t never happening with Ms Flamingo.

It’s a fun song, a cute song, a song that needs but a short post like this to do it justice. This was the middle disc in Manfred Mann’s chart-topping run, and I like that they straddled the swinging sixties with their #1s: one in 1964, one in ’66, and one to come in ’68. They’re not a name that instantly springs to mind when you think of ‘Biggest Acts of the 60s’, but perhaps they should be. Enjoy!