For the 3rd post in a row, we have somebody new at the top of the charts. Mr. Frank Ifield is going to burn very brightly, and very briefly, across British pop in 1962-63 and he kicks things off here with a big ol’ seven-week stay at #1. 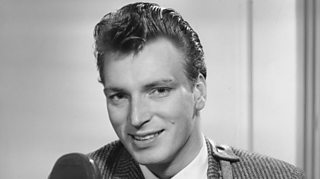 Let’s get down to business, then. What is this new and rather sudden singing phenomenon all about? On first listen… I’m not sure. There’s a nice, rolling C&W rhythm, and a lot of harmonica. This is a record that is harmonica-heavy. I remember you-oooh… You’re the one who made my dreams come true, A few, Kisses ago…

He’s got a distinctive voice, does Frank Ifield. It’s a good voice; but not what I’d call a particularly enjoyable voice. He has a tendency to launch into extremely high notes at the end of each line, for a start. Then there’s the way he takes the phrase out of the blue, and adds about eight extra syllables onto the end. Wiki describes Ifield as a ‘singer and guitarist who often incorporated yodelling’, but I wouldn’t describe what he’s doing here as ‘yodelling’ exactly. It’s more that he’s just fannying about when he should be getting on with singing the song.

Singing style aside, I’m not terribly sure what this song is about, either. He ‘remembers’ a girl, but that’s because he just kissed her. When my life is through, And the angels ask me, To recall, The thrill of them all… That’s a strange thing to think, as you kiss the love of your life – that you’ll remember it on your deathbed. Or is it extremely romantic? Kind of? Contrast these very lightweight lyrics with those of Ray Charles in the previous chart-topper. Big difference.

If you’re getting the feeling that I’m not terribly into this record, then you’d be right. This is the first time I’ve ever heard it and, to be honest, it’s average. Even the music is a weird kind of Americana: a British interpretation of Country & Western (Ifield was British-Australian). You can imagine him on a music-hall stage, perched on a wooden fence, chewing a bit of straw. Howdy pardner…! But – and this might just be me – I’m also getting slight Merseybeat vibes. Maybe it’s the way his sentences run on – You’re the one who said I love you too, Yes I do, Didn’t you know…. – or maybe it’s the chord progression. The harmonica ‘riff’ which I complained about at the start kind of reminds me of ‘Please Please Me’ by The Beatles. The Merseybeat explosion is less than a year off, and the bands that would lead it were already around and making music, and so perhaps it’s not so far-fetched to be hearing the sounds already creeping through.

The end of ‘I Remember You’ sounds pretty cheesy and cheap, and I, personally, was glad that we got there in just over two minutes. If ‘I Can’t Stop Loving You’ was a Champions League kind of record; then this is solidly League One. The Scunthorpe United of chart-topping singles. It’s a cover of an old forties standard – which means that the blame can’t be heaped wholly at Frank Ifield’s door and that the people of 1962 would perhaps have already known the song, giving it a head start in its bid for the top. Yet, I remain unconvinced that this is what the charts needed. And why on earth it stayed at #1 for seven weeks, selling over a million copies in the process, is a real mystery. Maybe it shouldn’t be, though: bland and accessible sells – always has, always will.

I’ll hold off on any Frank Ifield biography for now – this is just the beginning of a big twelve months for him, and we’ll be hearing a lot more from him very, very soon. For now, let’s leave the bio at him being (half) Australian, and thus the first in a very long line of Aussie chart-toppers. To be at the head of a list that contains Kylie, The Seekers, Olivia Newton-John and Peter Andre is a proud achievement indeed…