Now this is how you make an instrumental rock ‘n’ roll record! At the risk of sounding like a complete pleb, this latest chart-topper is ten-times better than its highly-regarded (but pretty dull) predecessor, The Shadows’ ‘Wonderful Land’. 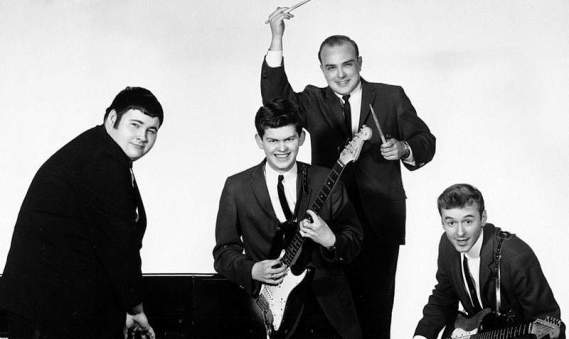 Imagine a Buzzfeed listicle entitled ‘23 Things You Never Knew You Needed in Your Life, But Totally Do’. Top-spot on that list would surely go to “the march from The Nutcracker done in a rollicking, boogie-woogie-slash-rock ‘n’ roll style”. And as it so happens – that is exactly what ‘Nut Rocker’, by B. Bumble & The Stingers, is!

This is a bizarre, wacky, completely unexpected record. Coming as it does after pretty sedate efforts from Cliff, The Shadows and Elvis, it sounds like a drunken uncle bundling his way onto the dance-floor at a wedding. And I mean that as a good thing. This is a superb record. I might even go as far as saying that it’s life-affirming. This is why humans were put on the planet – to make songs such as this. This needs to swap places with ‘Wonderful Land’ as the record that spent eight weeks atop the charts.

I don’t actually have much to write about the song itself – I tried to take notes, but ended up just smiling and tapping my feet. Plus, it races to an end in under two minutes. But those two minutes include the following: a stupidly dramatic intro, piano riffs, superb drum fills, and a natty little guitar solo. It is undeniably the march from ‘The Nutcracker’, but it’s so much more than just the march from ‘The Nutcracker’. Listen to that here, then listen to ‘Nut Rocker’ through the link below. It’s pretty special, actually, how they’ve stayed true to the original piece of classical music but added everything you need for a rock ‘n’ roll song. It is a novelty, it is silly; but I wouldn’t call it a piss-take. It’s clearly done with love.

For perhaps the first time in this countdown, I can remember exactly where I was when I first heard this song. I was in the passenger seat of my mum’s car, aged fourteen or so, on a Saturday afternoon in May. We were listening to ‘Pick of the Pops’, a radio show that replays the charts from any given year. That week it was the chart from 1962, and we had been guessing who might have been at the top of the charts – Cliff? Elvis? Roy Orbison? It was a bit too early for The Beatles… When B. Bumble & The Stingers were announced as the #1 we… well, we burst out laughing. In a good way. It’s that kind of record.

The Stingers were very much a flash-in-the-pan kind of act. They had had success with a version of ‘Flight of the Bumblebee’ before ‘Nut Rocker’, and they followed their sole chart-topper up with a version of the William Tell Overture ,‘Apple Knocker’, and ‘Dawn Cracker’ – based on Greig’s ‘Morning Mood’ (they had clearly found their niche). All were done in the same boogie-woogie style, but having had a listen I can confirm that none come close to the genius of this track. ‘Nut Rocker’ really was a case of capturing lightning.

Just in case you somehow remain unconvinced about how good, yet slightly mental, this record is, here are a couple of things to chew on before we finish. One – this song was almost banned by the BBC, as they had a policy of not playing records which parodied classical music. How dare these teddy boy upstarts lampoon proper music! (In the end they let it pass, as even the stuffed-suits in Broadcasting House saw ‘Nut Rocker’ for the heartfelt homage that it clearly was.) Two – and if this doesn’t convince then you are beyond redemption – it means that Pyotr Ilyich Tchaikovsky has a writing-credit on one of the silliest chart-topping records in history. Roll over Beethoven, indeed…