We enjoyed/suffered through (delete according to personal preference) a Cliff-less 1961. But Britain’s great rock ‘n’ roll hope kicks off 1962 with… (pause for dramatic effect)… his most famous hit?

The Young Ones, by Cliff Richard (his 5th of fourteen #1s) and The Shadows (their 7th of twelve #1s)

OK, there are the Christmas songs. And ‘Summer Holiday’. And ‘Congratulations’… Let’s just say that this is his most famous song not about festivities and/or vacations. Though this latest chart-topper is a celebration of sort – a celebration of being young!

Its starts with some Shadows ™ guitar, before Cliff comes in with his gossamer-light voice… The young ones, Darlin’ we’re the young ones, And the young ones, Shouldn’t be afraid… I am slightly loathe to admit it, but I have missed that voice of late… To live, Love, While the flame is young, ‘Cause we may not be the young ones very long… Any song performed by The Shadows and sung by Cliff can’t fail to be of a certain standard. It may well be cheesy, and the lyrics might be very trite, but downright bad? Unlikely.

And ‘The Young Ones’ does have its moments. I love the beat-band drum fills, while the guitars are very reminiscent of Buddy Holly’s mid-tempo hits – ‘Heartbeat’, ‘Maybe Baby’ and the like. Yet it’s far from perfect –  corny couplets like: Oh I need you, And you need me, Oh my darlin’, Can’t you see…? make sure of that.

And then there are the violins. Yep, Cliff’s gone orchestral. By the end the strings are swirling and cascading, drowning out Hank and Bruce’s guitars. (I can’t help wondering if this was one of those tracks, like the minimalist ‘Travellin’ Light’, on which The Shadows were a little bored…) I had to double-check that I was listening to the original version, rather than some kind of polished re-release… I’d see this as Cliff’s attempt to move away from teeny-bop discs like ‘Please Don’t Tease’ and ‘I Love You’ – his bid for adult-artist longevity. 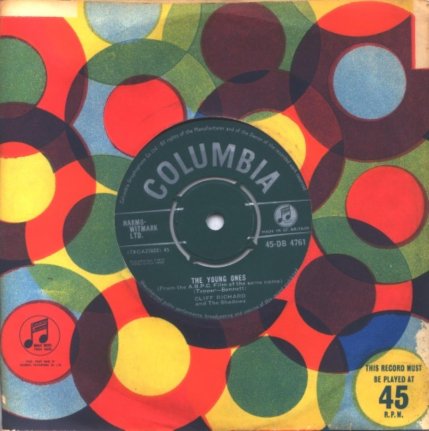 In that regard it’s a very clever record. The lyrics are about being young; and yet the production is very grown-up. It isn’t enough of a departure to alienate the screaming fifteen year-olds, but it’s classy enough to get grandma interested. And there’s a bittersweet edge to the closing lyrics that will appeal to mum and dad: And someday, When the years have flown, Darlin’ then we’ll teach the young ones, Of our own…

I wouldn’t call it a sell-out in the same way that Elvis prancing about in Lederhosen singing ‘Wooden Heart’ was a sell-out. Because, let’s face it, Cliff has never – in terms of his chart-topping singles, at least – managed to justify his tag as Britain’s foremost rock ‘n’ roller. From the opening chords of his first #1 he’s been planted firmly in the middle of the road. But… Something definitely clicked here, and his career has kicked up a gear. Thanks to its role on the soundtrack to Cliff’s movie of the same name, ‘The Young Ones’ had built up a staggering 500,000 pre-orders before its release, meaning that it rocketed straight in to the charts at Number One – only the 3rd single (and the 1st single not released by a certain Elvis Presley) to do so. It remains his biggest seller in the UK.

And its legacy was such that twenty years later it became the theme tune to BBC sitcom ‘The Young Ones’, in which Rik Mayall played a lisping, tantrum-throwing, anarchy-loving Cliff fan. The joke of course being that, by 1982, young people with any aspirations towards being cool couldn’t possibly be Cliff fans. But, the eighties are a long way off yet in our world. It’s January of 1962, Cliff and The Shadows are the biggest pop-stars in the country, and they’ve just scored their biggest hit yet. Though, as with all of us, they may not be the young ones very long…