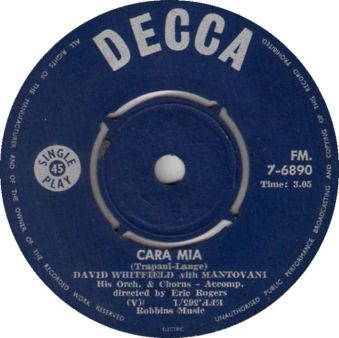 Cara Mia, by David Whitfield with Mantovani & His Orchestra (both Whitfield and Mantovani’s 2nd of two #1s)

The last time I wrote about David Whitfield, when his first number one followed on from Frankie Laine’s rockabilly number ‘Hey Joe’, I might have mentioned something about it being one step forward and two steps back…

But for this to follow on from rock ‘n’ roll pioneer Johnnie Ray, and the gloriously suggestive ‘Such a Night’ (OK, yes, Doris Day did return to the top for a big old spell in between but let’s not allow that to get in the way of my indignation!) – it’s more a case of one step forward, ten steps back! One step for every week this record spent at the top! The difference between this and ‘Such a Night’ is massive. This is pre-rock. If such a thing ever existed, if it could be captured and bottled or defined in a dictionary, then this would be it. The Sex Pistols were punk, Oasis were Britpop, David Whitfield was pre-rock.

Shrill backing singers? Check. Overwrought vocals? Got it. Proper enunciation? Yep. Big bastard of an ending? Oh boy. Seriously, check out this ending. It has three stages. Whitfield comes in for the final verse like he means it, an octave up on previous lines: All I want is you, for ever more… Then comes the final line for which he amps it up even more: TILL THE END OF… And the note that he hits for the final TIIIIIMMMMMMEEEEE!!! cannot be natural. Its impressive, yet horrifying.

I have nothing new to write about David Whitfield. He’s of his time, and who am I to judge? People at the time clearly enjoyed it: very, very few records have ever reached double figures in terms of weeks at #1. ‘Such a Night’ only got one week. And he died young, unlike so few of his contemporaries, aged just fifty-four in 1980. We should also drop a mention for Mantovani, of violin and rhyming-slang fame, from whom we won’t be hearing again in this countdown. The violins in this song sound identical to those in his first chart topper. Mantovani’s signature strings. 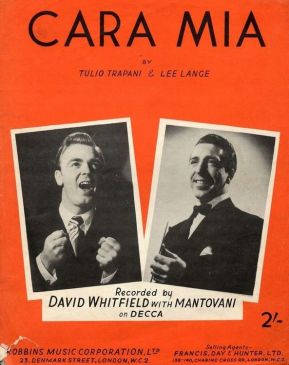 Though the sharp-eyed among you will currently no doubt be thinking ‘Now just wait a minute here!’ Because back a few posts ago I mentioned that every record thus far had been conducted by someone and their orchestra, and that these conductors – Paul Weston, Hugo Winterhalter et al, never seemed to get credited and were deleted from any chart statistics. So why is Mantovani getting a credit here? To be brutally honest… I dunno. Maybe it’s because this, more than any, is a super operatic, orchestral record and they feel that that should be recognised. Maybe it’s because Mantovani already sneaked a week at the top with his own song, ‘Moulin Rouge’, and so was slightly more renowned than your run-of-the-mill conductors. Maybe Mantovani was just really concerned about his legacy and so paid someone to stick him in the records. Who know? But if I were Paul Weston, I’d be pretty pissed off.

Before finishing, I want to mention a thought that struck me a few posts ago. It seems that in the mid-1950s there were very few ways for people to hear the music that was in the charts without buying it. No MTV (duh!), no Top of the Pops, no YouTube, no nothing. Radio consisted of a handful of stations, very few of which played pop music. Pirate Radio hadn’t got going yet. Perhaps you could have listened to ‘Pick of the Pops’, on the BBC Light Programme, but even that wasn’t first broadcast until 1955. It just seems so alien to me, to us, that you might only know of a record as a listing in a magazine and have no idea how it sounded until you went out and bought it.

Although, this might explain how certain songs managed to top the charts in the first place…

23 thoughts on “20. ‘Cara Mia’, by David Whitfield with Mantovani & His Orchestra”