After the all-out nihilism of ‘Paint It, Black’, it’s time for a slight change of pace. A fifty year old crooner – a legend, even by this point in his career – with a song about the joys of a chance meeting.

Strangers in the Night, by Frank Sinatra (his 2nd of three #1s)

Soaring strings, a gentle sway, and Ol’ Blue Eyes… Strangers in the night, Exchanging glances, Wond’ring in the night, What were the chances… It’s timeless, traditional pop. A similar, if much classier, version of Ken Dodd’s mega-hit ‘Tears’ from the previous year. A record that might have been #1 in 1946, 56, 66, 76… you get the drift. By this point in his career, a good twenty years since he graduated from teen-idol status, Sinatra was not about to reinvent himself as a folk singer.

Frank Sinatra is a weird proposition for me. He’s old, too old even for my parents to have listened to him. He released his first single in 1939, and he would be a hundred and four were he still around today. And yet, the songs are there. They reach you anyway, regardless of whether you grew up hearing him. ‘Fly Me to The Moon’, ‘New York, New York’, ‘My Way’… He’s also a weird proposition for me as I’m not convinced that he was all that great a singer. I mean, he obviously was – the way he holds the yooouuuuu before the chorus here is good – but at the same time he talks his way through certain lines. The Ever since that night… line, for example. 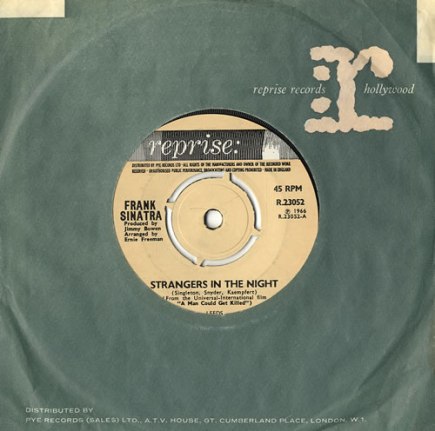 We have heard from Frank before in this countdown – going on twelve years ago, when he took ‘Three Coins in the Fountain’ to the top. Now, twelve years between #1 hits is a long time in any era of the charts; but this gap, straddling rock ‘n’ roll and the beat revolution, is particularly impressive. And this is the Sinatra that everybody knows, the Sinatra that wannabes cover on talent shows… the vast majority of his best known hits come from the sixties. Try naming one of his bobby-soxer hits from the early forties…

I love the pause, before we sweep into the final verse of ‘Strangers in the Night’. It’s cinematic, cocky Sinatra. And then perhaps the most famous bit of this song: do bee do bee dooo, da-da-da-da, yayayaya… So famous that it apparently inspired ‘Scooby Do.’ He sounds like your uncle, drunk at a wedding, forgetting the words… And then it hits you. That’s why Sinatra was, and still is, so popular. Because drunk uncles at weddings can just about pull off an impression!

Sinatra, though, hated this song. He couldn’t stand the record that returned him to the top of the charts after a decade. And he wasn’t ever subtle about it, either. It was ‘a piece of shit’ and ‘the worst fucking song (he’d) ever heard.’ You wonder, then, if the do-bee-do skat is simply him giving up. (Which makes the whole song even more glorious, if you ask me…)

Whatever the reason – the quality of the song, the iconic doo-be-doos, Sinatra’s vehement hatred of it – ‘Strangers in the Night’ became one of his biggest hits, one of his signatures, a song that he would have to bite the bullet on and perform every night for the rest of his life. I’d also suggest that his daughter hitting the tops of charts around the world just a few months earlier wasn’t bad publicity, either. Not that it matters. An artist of Sinatra’s stature needs to feature in this countdown. And I’m glad that he does.