Time for something a little different. A record with a glam rock beat to it – as is becoming the norm – but with twiddly, electronic bits too. Think Joe Meek producing a Slade song, sung a sarf–Lahndan accent. 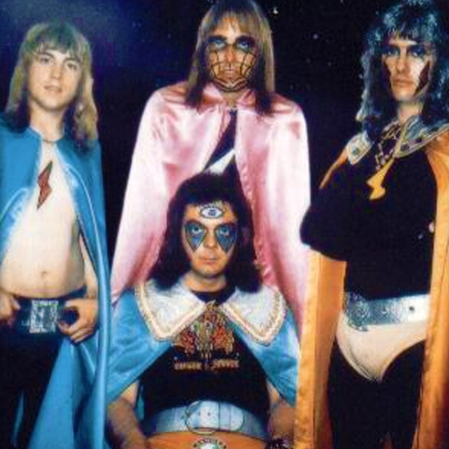 The initial riff is simple and repetitive; but effective. It drills into your head and stays there. There’s a reason why this song lives on to this day in football chants. And at the end of each line there’s an electronic flourish. It sounds futuristic, but also old-fashioned in its simplicity. And then completely of its time thanks to the glam-stomp. An impossible record to place…

Adding another layer are the lyrics. This is no love-song, nor a party anthem. It’s a song about breaking with tradition. In the first verse, a mum is advising her son as he grows up: Be just like your dad lad, Follow in the same tradition, Never go astray and stay an honest loving son… (Though to be honest I’m relying on ‘LyricFind’ here, thanks to the thick accent and the mix, which pushes the synthesisers right to the front.)

Son of my father, Molded, I was folded, I was preform-packed… It’s an anthem of frustrated youth, of the need to make your own way in the world. It’s got a message… Which is overshadowed by the fact that this is the first completely electronic #1. It’s just, to my ears anyway, synthesisers and hand claps. (I know, there’s a bassist in the video below.) We’ve had ‘electronic’ chart-toppers before… ‘Runaway’ by Del Shannon, and The Tornadoes seminal ‘Telstar’, but none so completely sold to the sound. The solo here is a fifties piano-rag, but one beamed in from another planet. 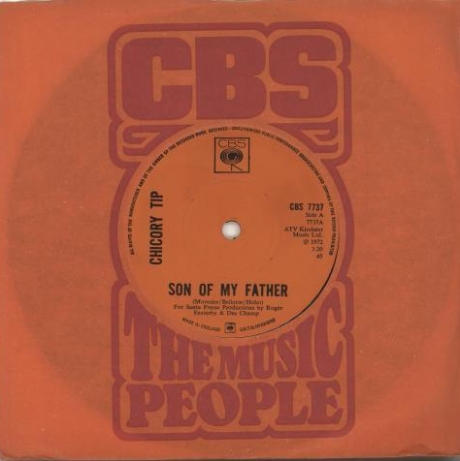 ‘Son of My Father’ was based on a German hit from the year before, the melody of which was composed by none other than Giorgio Moroder. Moroder himself had released a version with English lyrics – listen to it here, it’s slightly faster and with a bit more ‘oomph’ to it, I think I like it better – but it did nothing. Then Chicory Tip got hold of the song and sold a million with it.

By the end of the song, the son has broken away from the pressures of his family and tradition. Son of my father, Changing rearranging into something new, Collecting and selecting independent views… But he’s still the son of his father. You can reject the past while still respecting it. I like it.

It’s a strange little song. I have to keep reminding myself that it really is quite ground-breaking. It’s easy to lose sight of that, and to get distracted by the fact that it’s also a catchy pop hit. Chicory Tip had been around since 1967, without much success. ‘Son of My Father’ was their first hit of any kind, and they scored two further Top 20s in its wake. They released one album before calling it a day in 1975, though they soon reformed in different versions that still tour.

So then. We have a huge #1 smash, combining two of the 1970s foremost sounds: glam and electronica. (Throw in a dash of disco and it would have been a hat-trick.) This is a big hit, and a big step forward.