To fully appreciate this next #1, I want you to go back and listen to the previous chart-topper, Elvis’s ‘She’s Not You’. Off you go. Done? Good. Because we need to make sure we know exactly where we are in October 1962. We’re in a bit of a post rock ‘n’ roll slump, with lots of middling pop and quirky novelties rather than an easily definable ‘Sound of ‘62’. And after that mediocre piece of Elvis-by-numbers, this song’s going to Blow. Your. Mind. 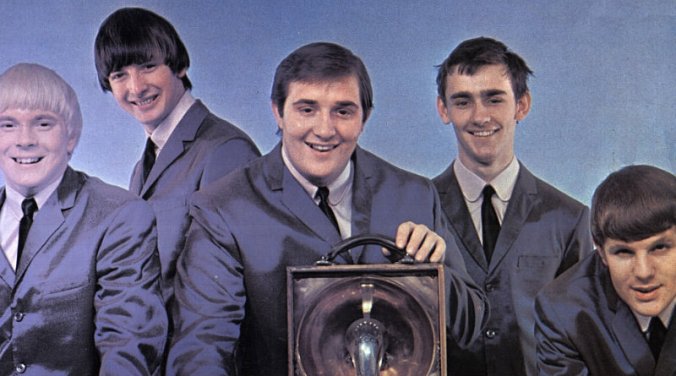 Telstar, by The Tornados (their 1st and only #1)

The intro alone to ‘Telstar’ has enough innovative weirdness for there to have been papers written and conferences held on it. It’s an intro that sets a scene. I imagine a dust track at night in the Nebraskan desert. What sounds like a car coming to a stop. A weird humming and hissing. Ominous music that grows nearer and nearer. Pure B-movie soundtrack brilliance. It sounds bizarre listening to it from the comfort of 2019. It must have freaked people the hell out when they first heard it in 1962.

‘Telstar’ is an instrumental, one with a pretty simple and fairly repetitive melody. I’m no musician, but I’m guessing that, looking at the music written down on paper, it’s a tune that The Shadows – the pre-eminent instrumental group of the age – could have knocked out in their sleep. But, if you study ‘Telstar’ simply as notes on a page then you are missing everything else that makes this record amazing.

This is The Shadows recast as aliens. This is The Shadows playing as the Cantina band from Star Wars. There ain’t no guitar or drums here. Or, at least, there might be; but they’re way off in the background. This is an electronic record. A fully electronic record drenched in ethereal echo and lots of effects. This is what was hinted at in the Musitron on Del Shannon’s ‘Runaway’ and in the ghostly effects on ‘Johnny Remember Me’, come to full fruition.

It’s a record that tells a story. One of my major complaints whenever an instrumental number one comes along is that, without lyrics, they often struggle to be anything more than a melody looking for a home. There are exceptions to this rule, of course; and none bigger than ‘Telstar’. When the key-change comes and the backing singers join in with the tune you really can picture that car on the dust track in Nebraska, a girl clinging to her boyfriend’s arm, a huge light opening up in the sky above, ready to beam them away…

It’s also a record that is, perhaps more than any other #1 we’ve covered so far, a very specific product of its time. The Telstar Communications Satellite was a real satellite, launched four months before this disc hit the top spot. Barely a year before that, Yuri Gagarin had become the first man in orbit. The space-race had lift-off (pardon the pun) and this record sounds as if it comes from a distant galaxy compared to Elvis, Frank Ifield et al. It was also during ‘Telstar’s five weeks at the top that the world held its breath over the Cuban Missile Crisis, and I can’t think of a better song to put on the gramophone ahead of a nuclear Armageddon. 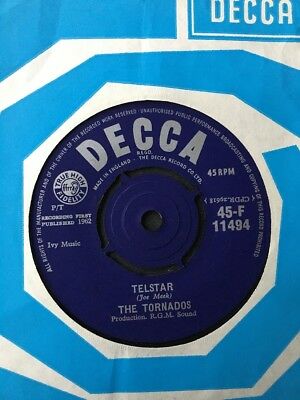 I mentioned ‘Johnny Remember Me’ and, as many will already know, both it and ‘Telstar’ were products of the bizarrely brilliant mind of producer Joe Meek. But whereas ‘Johnny…’ was the sound of Meek flexing his creative muscles; this disc is his masterpiece. He has one more chart-topper to come so we’ll save the main bio for then (though I could reserve a whole blog post, nay a full-on book, for an overview of his brilliant, troubled and ultimately tragic life.)

The Tornados, on the other hand, only ever had this moment at the top. I have to admit that in doing my research for this post I’ve fallen down something of a Tornados rabbit-hole… They were perhaps better known as the backing band to Billy Fury – an early British rock ‘n’ roller, a cooler version of Cliff, if you will, who never quite made it to the top of the charts. They were also a vehicle for Joe Meek’s experimental flights of fancy, and released a bunch of innovative, funny and outright bizarre records throughout the early to mid-1960s. Check out, for example, ‘Do You Come Here Often?’ – the B-side to their final ever single – in which two men full-on flirt over a loopy lounge-jazz melody. It was released in 1966, when ‘that sort of thing’ was still very much illegal…

However, nothing else they ever recorded came close to matching the success of ‘Telstar’. Not only was it a huge hit in the UK; it was the first ever US #1 by a British group – beating a certain foursome from Liverpool by just over a year. You can hear its influence in, say, prog rock, the electronic acts of the late ‘70s and ‘80s, and in the ‘Dr. Who’ theme. Muse scored a Top 10 hit in 2006 with ‘Knights of Cydonia’, a song which was, how to put this, lovingly influenced by ‘Telstar’. (Muse frontman, Matt Bellamy’s father was actually the guitarist in… wait for it… The Tornados! How ‘bout dat.)

Anyway… Glancing down my list of upcoming chart-toppers, I’m under no allusions that this has been anything other than a wonderfully freak occurrence, rather than a shift in the British musical landscape. But what a freak occurrence. That this song was the 141st UK #1 single should be celebrated long and loud. Press play once more and imagine that it’s you in that car on that dusty desert road. Beam me up…!