Now this is more like it. This is a chart-topping single! 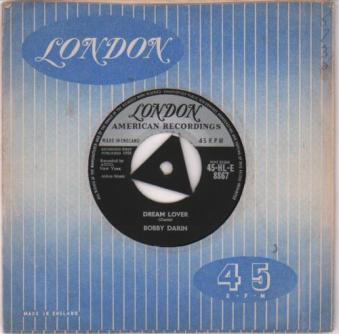 It’s been a while since I listened to this song, or to any Bobby Darin songs, but slipping the needle to hear ‘Dream Lover’ is like slipping into a silk dressing gown and settling down by the fire: Every night I hope and pray, A dream lover will come my way, A girl to hold in my arms, And know the magic of her charms…

We get not one but two groups of backing singers: girls for the ‘oohs’ and boys for the ‘wadda waddas’. We get strings and we get some oh-so-fifties staccato guitars. In fact, I’d put this up there with ‘Diana’ and ‘When’ as the most fifties, most rock ‘n’ rolly, doo-woppy #1 yet. But ‘Dream Lover’ is a much better song than either of those.

And that’s down to Bobby Darin. His voice is as crisp and as clear as a bell, and he lends the song a sort of… gravitas, that places it a cut above pure teeny-bopper fluff. He sounds older than his twenty-three years, and sounds suave where Paul Anka and the Kalin Twins sounded puppyish. Does this then represent the pinnacle of late fifties rock ‘n’ roll-as-pop? Maybe something to consider in our upcoming re-cap.

For all that, it’s a simple song. The singer wants a dream lover, so he doesn’t have to dream alone. Someday, I don’t know how, I hope she’ll hear my plea, Some way, I don’t know, She’ll bring her love to me… The listener knows where the song is going, but is more than happy to be taken along for the ride.

I don’t want to really write any more about this record. I want to leave it there. Minimalist. This is where easy-listening and pop collide to create a seriously classy song. And we’ll be hearing from Bobby D again very soon, so we can delve into his backstory then. For now, just sit back, relax, and enjoy. 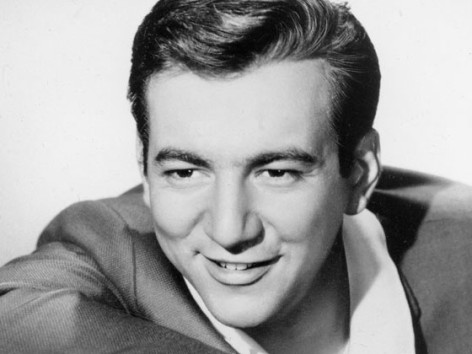 There are two little things of note, though, that we should point out here. I mentioned in my post on ‘Hoots Mon’, back in November ’58, that the production on these chart-topping singles was getting more substantial, beefier. And I have to admit that on ‘Dream Lover’, and to a lesser extent on ‘When’, I’m getting a hint of the ‘Wall of Sound’ technique – Phil Spector and all that – which will be all the rage in three or four years. Listen to the crashing symbols that precede the final verse and chorus here, and you’ll see what I mean. Interestingly, this song was engineered by Tom Dowd, a pioneer of multi-track recording. So there could be something in that…

And finally, while this is a wonderful record more than worthy of a month atop the UK Singles Charts… something has been nagging at me for a while now. Are our #1 singles growing more and more lyrically banal? Let’s explore. Drag your minds back to the dark and smoggy days of pre-rock and yes, song lyrics were probably pondering weightier issues: I believe for every drop of rain that falls, A flower grows… Or Three coins in the fountain, Which one will the fountain bless…? Or I saw her face and ascended out of the common place, into the rare, somewhere in space… from ‘Brainiest #1 Yet’ ‘Stranger in Paradise’. Or they at least talked of love in slightly flowerier, more abstract terms. And there haven’t been any out-of-place, soundtrack songs like ‘Hernando’s Hideaway’ or ‘The Man from Laramie’ with lyrics about sharp-shooters and speakeasies hitting the stop spot recently.

In 1958-9, while there are anomalies like ‘Smoke Gets in Your Eyes’ and ‘The Day the Rains Came’, it’s mainly all Dream lover, where are you…? All I have to do is dream… And Goodness gracious great balls of fire…! Simple, immediate stuff. Is this a bad thing? Rock ‘n’ roll may have dumbed things down a bit, but its brought an immediacy to our chart-topping hits. Everyone can relate to someone sitting at home wishing for a dream lover. Not everyone can relate to She wears red feathers and a huly-huly skirt… I’m all for it really. And that’s probably a good thing, as our next #1 takes simple to the next level.