Before we begin writing anything about this record, let’s take a minute to appreciate the name of the man who recorded it… Mr. Conway Twitty. It’s a strange name – ‘Conway’ being quite rugged and windswept, and ‘Twitty’ being somewhat less so. It’s a name you don’t forget in a hurry; which I suppose is a good thing in show-business. 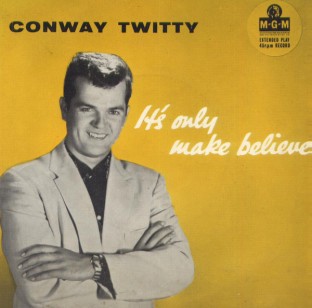 It’s Only Make Believe, by Conway Twitty (his 1st and only #1)

And note! I’ve finally – seventy-eight number ones in! – managed to locate some genuine cover art to stick at the top of my post. This, I am strongly led to believe, was the genuine cover that people would have seen in British record stores when they went to pick up their copies of ‘It’s Only Make Believe’.

To the song. A guitar strums… People see us everywhere… Another strum… They think you really care… Strum… But myself I can’t deceive… I know it’s only… Make… Believe… Conway loves a gal, but she ain’t lovin’ him back. Bizarrely enough, it sounds quite like the intro to ‘Runaround Sue’ – but that’s a story for another day.

My only prayer will be, Some day you’ll care for me, But it’s only Make… Believe… Is she using him to get back at an ex? Is she leading him on? Is she just a tease…? The reasons as to why they are leading this pretend-life remain tantalisingly out of reach. But Conway’s got it bad. His heart is a-achin’.

This is a rock ‘n’ roll ballad. We’ve toyed with the concept up to now. Was ‘It’s Almost Tomorrow’ the first? Or was it ‘Young Love’? Or was it neither? Because this is heart on your sleeve balladry. This is the real deal, and the starting point for all manner of Bon Jovi / Aerosmith-type fist clenching, air-punching soft-RAWK. Not that it actually sounds anything like a late ’80s power ballad; but mark my words – the seeds are being sown. The lyrics are super-overwrought: lots of my all, my everything, I’d give my life for you etc. etc. But Twitty sells it, just about, with some top-notch wailing. You really believe that his heart is cracking in twain as he sings.

This is also, I’m pretty confident in saying, our first slice of country rock at the top of the UK charts. We’ve had country before – a bit of Frankie Laine here, a little Slim Whitman there – but this is rock ‘n’ roll with a country twang. The Eagles, Dolly and Shania, even Tay-Tay before she went basic, stem from this kind of thing.

I know, I know… That’s a very bold statement. But it’s useful, as we reach the end of 1958, to take a step back and admire the bigger picture. We’re over two years into the ‘rock’ age and, as I’ve commented on several recent chart-toppers, there is more and more of a fusion going on. Songs like ‘The Story of My Life’, ‘All I Have to Do Is Dream’ and ‘It’s All in the Game’ topped the charts this year, and were all pop songs – hummable, easy listening numbers – with a distinct whiff of rock ‘n’ roll. The year started out with two utter classics – tracks one and two on Now That’s What I Call Rock N Roll: ‘Great Balls of Fire’ and ‘Jailhouse Rock’. Since then, though, the overriding theme of 1958 has been one of much ‘blander’ rock ‘n’ roll. And so ‘It’s Only Make Believe’, is in many ways the perfect track to round the year off – a rock song much more likely to appeal to mum, and gran, than the kids.

The worst thing about this whole record is that Conway Twitty was not the singer’s real name. Boo! He was actually one Harold Jenkins, and apparently got his stage name after blindly opening a map and finding a town named Conway in Arkansas and one called Twitty in Texas. So far, so C&W. ‘It’s Only Make Believe’ was his only big success on the UK charts, so I make it three-in-a-row in the one-hit wonders stakes. He stumbled through the 1960s before becoming an absolute demon on the US Country Charts in the ’70s and ’80s, with hits like ‘Tight Fittin’ Jeans’ and ‘Red Neckin’ Love Makin’ Night’. Yee-haw! Best of all, he lived in a self-built multi-million dollar ‘country music entertainment complex’ called, wait for it… ‘Twitty City’. He died in 1993, aged but fifty-nine.

We’ll leave him here, caterwaulin’ us into 1959, the final year of the decade that gave us rock ‘n’ roll, Elvis, Buddy and Jerry Lee. Beyond that lie the 1960s, and nothing much of musical interest happened then. Did it?