Butterfly, by Andy Williams (his 1st and only #1)

Our latest chart topping single has it all: handclaps, finger-clicks, whistling, lots of bum-bum-bums and doo-waas from the backing singers… the whole shebang! The perky guitars and drums that have accompanied us over the past half-dozen #1s also remain. It’s a little gentler than ‘Cumberland Gap’ and a little poppier than ‘Rock-A-Billy’, but ‘Butterfly’ is undeniably a rock ‘n’ roll record.

The lyrics compare a girl to a butterfly because, well, she likes ‘flying around’ – if you catch my drift… You tell me you love me, You say you’ll be true, Then you fly around, With somebody new, But I’m crazy about you, You butterfly…

We’ve had lots (and lots) of references to unrequited love in the previous fifty-eight number ones, but the girls in songs like ‘Answer Me’ were simply described as being hard to get, as untouchable angels, paragons of female virtue. This is the first time we’ve had a girl described as something of a floozy. And Andy Williams, try as he might, can’t get over her: I knew from the first time I kissed you, That you were the troublin’ kind, Cos the honey that drips, From your sweet lips, One taste and I’m outta my mind…

But, he doesn’t plan on waiting. Male singers stoically waiting around for their love to notice them hasn’t been in vogue since mid-’55. No, no, no – that ain’t cool no more! These days they either wallow – see ‘Just Walkin’ in the Rain’ – or they take action – see Mr. Williams here: I love you so much, I know what I’ll do, I’m clippin’ your wings, Your flyin’ is through… That’s a slightly sinister metaphor, isn’t it? ‘Clipping’ his girlfriend’s ‘wings’… But hey, you could get away with that sort of thing in 1957. 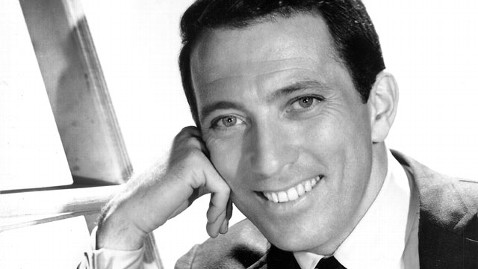 Andy William’s has a slightly softer voice than some of the male singers we’ve been hearing from recently, and this softens the song’s impact a little. You can imagine a singer with a real rasp in his voice turning ‘Butterfly’ into a proper rocker. As it is, it’s a fine little track that doesn’t outstay its welcome, but it’s a little… basic? Six months into the rock ‘n’ roll revolution and songwriters/performers are perhaps already resting on their laurels, churning out production-line hits.

Or maybe that’s a bit harsh. Williams is much better known – to me at least – for more easy-listening, cocktail lounge records such as ‘Can’t Take My Eyes Off You’, ‘Music to Watch Girls By’ and ‘It’s the Most Wonderful Time of the Year’ (one of those songs that drives you a little bit mental in shopping centres every Christmas.) He didn’t stick with the rock ‘n’ roll for long, it seems, which was probably a wise decision as it prevented him from being tarred with that particular brush, and allowed his chart career to extend well into the 1970s.

But ‘Butterfly’ was his sole UK chart topper. Like Tony Bennett, Dean Martin, Bill Haley et al before him, he ticks ‘Get a UK Number One’ off his to-do list pretty early on in his career. And, as with those other luminaries, it seems only right that he had his moment at the top. He’s undeniably a legend of popular music, whose recordings remain admired today. Case in point: a decade ago I spent six months teaching in Thailand, and one of the most popular songs when my Thai colleagues dug the karaoke machine out – which was very, very often – was ‘Can’t Take My Eyes Off You’. I somehow doubt they’d heard of ‘Butterfly’, though. Which is a shame, I suppose.