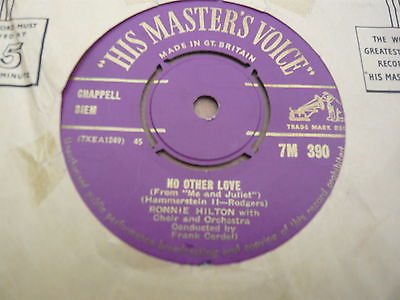 Through writing these blog posts, I’m becoming a strong believer in nominative determinism. I.e. through looking at the name of the recording artist one can anticipate what the song will sound like. Not that anyone’s been called Sax Jazzington, or anything silly like that. More like how Kay Starr sounds fun and flirty, Slim Whitman sounds grizzled and lonesome, Jimmy Young sounds… normal, and a little dull. I feel that Ronnie Hilton should fall into the latter category.

And, lo and behold, he does. It starts dramatically enough, though: a burst of cymbals, then another, then another… Then it feels like a step back in time, to the dark days of *shudder* David Whitfield. It’s semi-operatic, its over the top, it’s not a particularly easy listen. Hilton’s voice is overwrought. It’s a powerful voice, a technically very good voice, the sort of voice that your gran would have approved of; but it’s too much. It’s probably no worse than the Whitfield, Laine days of a couple years back, but it already sounds very dated coming so soon after more progressive-sounding records by Bill Haley, Alma Cogan and even Dean Martin.

Lyrically too, this is a song that’s been done before. No other love have I… Into your arms I’ll fly… Waiting to hear you say… ‘No other love have I’. He’s a little lovelorn, is Mr Hilton. I’ve mentioned it before, but why is it the girls that have all the fun in these early chart toppers? With a few exceptions (Vera Lynn, cough cough) they get to be perky and flirty while the men stay at home and stoically wait for their love to be fulfilled.

One thing I was certain of, without doing any kind of research, is that Ronnie Hilton was British. His voice has that properness, that stoicism, void of any kind of vulgar, American swagger. One other thing that I was pretty certain of, again before delving into Wikipedia and around, is that ‘No Other Love’ must have been from a soundtrack, such is its unnervingly bombastic approach to what is an otherwise very basic love song. And yes, it’s a Rogers & Hammerstein number, from their 1953 show ‘Me and Juliet’. 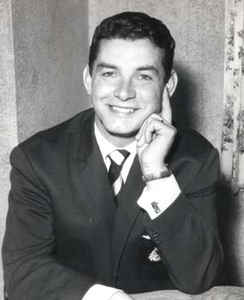 Actually, the most surprising thing I could uncover about Ronnie Hilton – this is his only appearance at the top so let’s give him a moment in the sun – is that ‘Ronnie Hilton’ was his stage name. He was born Adrian Hill. Let that sink in for a second: he, or somebody advising him, thought Adrian Hill was a little too boring, a little too staid, and that ‘Ronnie Hilton’ would get the girls swooning. I think that just sums him, this song, and this whole pre-rock era up… If you’re going to change your name in an attempt to gain fame and glory for God’s sake try to come up with something slightly sexy. No?

And – perhaps just as interestingly – Hilton recorded a fairly successful (in the UK at least) version of ‘The Wonder of You’, eleven years before Elvis Presley made it a standard. But… listen to Hilton’s version, then Presley’s version, and it becomes clear why the latter was one of the most famous voices, and personalities, of the 20th Century and the former wasn’t.

I’m being a little down on Ronnie Hilton, really, so let’s give him a break and end with something completely unrelated. Something that just occurred to me as I wrote the intro to this post. The only reason that my nominative determinism theory works is because I have heard so few of these early number one hits. I write the title down, search them out on Spotify, and take a step into the unknown. But, looking down the list of UK #1s through the remainder of 1956, through ’57 and ’58, this is going to become less and less of a thing. I know several of the next twenty or thirty records. Soon I’ll know the majority of them. Of course, every so often, even as we get to the eighties and nineties, there will be songs I simply have never heard before (I have no idea how ‘Doop’, by Doop, goes for example – and it had 3 weeks at the top in 1994) but, on the whole, we are slowly stepping out of the mist and onto firmer, better known ground.