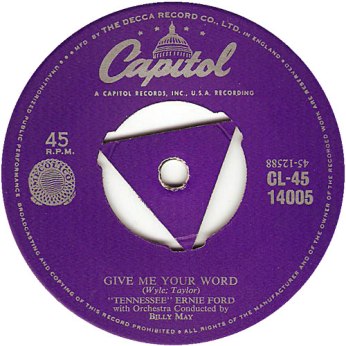 Give Me Your Word, by Tennessee Ernie Ford (his 1st of two #1s)

Before we get down to analysing this next chart-topper, let’s just take a second to appreciate the name of the artist that recorded it. Tennessee Ernie Ford… I wonder what kind of music he might make? (*cough* country and western *cough*)

But, no. While he has the voice for a C&W hit, this isn’t the song. He drawls ‘all’ into ‘aawl’ and ‘wants’ into ‘waaonts’, yet from this second this record cracks into gear, with soaring strings and a dramatic piano, we know we ain’t gettin’ a country lament – no tumbleweeds nor howlin’ coyotes. This is a song that means business.

It’s basically a marriage proposal – a lot of talk of vows, of being beside him, of words being given for ever and always. And, to be fair, you probably wouldn’t say ‘no’ to Tennessee: he has a deep sonorous voice, the voice of a man who can chop trees and wrestle cattle. Rough hands but a warm heart, that kind of thing. The only time the voice lets him down is at the very end, when a song of this gravitas needs a slightly more powerful, and slightly less Pingu sounding finish.

And is it just me, or are these chart toppers starting to get sexier? Ruby Murray was all about softly, breathlessly, touching lips and now Mr. Ford carries on the theme. Give me your lips, he drawls, and let your lips remain. Remain where, you might ask? It’s hardly Prince at his raunchiest; but it certainly isn’t something Eddie Fisher would have sung about either.

Looking at pictures of Tennessee Ernie, he looks somewhat like you would expect. Perhaps not as rugged as his voice makes him sound, but he has a natty little moustache, and clearly liked to play up his cowboy credentials, with plenty of Stetson ‘n’ rodeo-tassels popping up on a Google image search. He was really born in Tennessee, too.

But, for a song that starts of with grand intent, this is actually pretty dull. Or at least average. File it along with ‘Answer Me’ and ‘Cara Mia’ – songs that were huge, and clearly got people all weepy in their day, but whose melodramatic lyrics and OTT melodies have lost their resonance over time.