The Finger of Suspicion, by Dickie Valentine (his first of two #1s) with the Stargazers (their 3rd of 3 #1s)

We race on into 1955 with a song that sounds like it could be very interesting. The Finger of Suspicion! Dickie Valentine calls out his unfaithful love. He knows what she did! And he’ll stand for it no longer!

Except, no. This isn’t an era of surprises, of shocks… of excitement (with a few notable exceptions). This is a cloying little love song, putting the ‘easy’ into easy-listening. The crimes for which the accusing finger points are things like stealing a beat or two from the singer’s heart, robbing him of sleep etc. etc… All very smooth, Dickie, but the title promised so much more.

Musically it’s right down the middle of the road. Not too dull; but far from thrilling. There are snatches of film-noir soundtrack between the verses, and an extremely sedate guitar-cum-trumpet solo. Peak pre-rock!

Perhaps the most interesting thing about the song – and perhaps I’m clutching at straws here – is that Dickie Valentine is a Brit who sings like an American. Bear with me… So far in the British chart-toppers corner we’ve had folks such as David Whitfield, Vera Lynn, and Eddie Calvert. All very proper, all very sedate, all very… pleasant. They’ve sang their number one hits in a restrained, decidedly British fashion. Calvert even played his trumpet in a restrained, decidedly British fashion. Whilst the Americans – the Frankie Laines, the Guy Mitchells, the Rosemary Clooneys – have all had a bit of a swagger about them. And Valentine, here, has clearly learned from them. He doesn’t have the greatest voice, but it’s a bit louche, and slightly knowing. He sounds like he’s having a good time singing this song. Even the name, Dickie Valentine, sounds fun and stagey (his real name was the far more prosaic Richard Maxwell). We are witnessing the birth of the British pop star here, the first in a long line of cheeky, yet loveable faces that ranges from Cliff to Olly Murs, via Rod Stewart and Robbie Williams. It’s a moment of some significance. 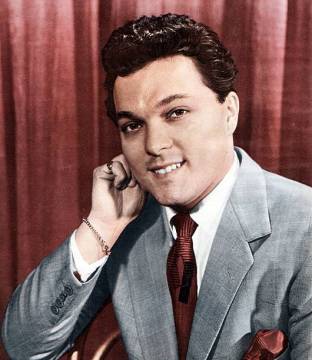 Almost as interesting is the manner in which Valentine ends the song. It seems that we are set up for the big, overly-dramatic finish so beloved of this era’s biggest stars. The finger of suspicion – dum dum dum dum dum dum – you’re ready for it, no matter the fact that it won’t suit the song – and then we get an ever so gentle points… at… you… Expectations well and truly subverted.

We are, of course, meeting The Stargazers again as well. Their first chart-topper was dire, their second was bizarre, and their final one is this standard little ditty. In truth, they barely feature here, save for a few backing lines. You wouldn’t even know they were involved if they weren’t credited. When this hit the top they became the act with the most UK Number Ones – joint with Frankie Laine. Best leave them there. They won’t hold onto this record for long, and will soon fade into the mists of chart history as an act very much of their time.

8 thoughts on “27. ‘The Finger of Suspicion’, by Dickie Valentine with The Stargazers”