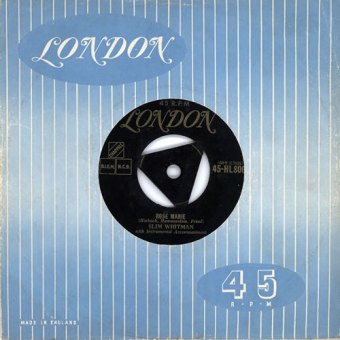 Yee-Hah! I hoped, back when Tennessee Ernie Ford was topping the charts with ‘Give Me Your Word’, that we might be seeing our first Country and Western #1. Well, Ernie didn’t quite live up to his name but we didn’t have to wait long. This is country with a capital C O U N T R and Y.

Slim Whitman stands alone on the prairie. The setting sun casts an orange glow across this horizon. Cacti spread their long shadows over the dirty ground. A tumbleweed bounces lazily by. Slim picks up his spittoon, clears his throat, and begins… Oh Rose, my Rose Marie… I love you… I’m always dreaming of you…

It’s an atmospheric record, I’ll grant you that. Just a piano, a simple rhythm and that weird noise which is the epitome of old, Nashville C&W: strange and echoing, made either by guitars submerged in water or sped up recordings of whale noises. You’ll know it as soon as you hear it.

Anyway, Slim can’t forget Rose Marie, and even wishes he’d never met her. Then he hums as he thinks of her. It’s quite effective. You really can picture him wandering plaintively past hail bays and broken barn doors, as the light finally fades.

I was planning to write something indignant about this record spending 11 (Eleven!) consecutive weeks at the top – setting a record that would last for thirty-six years. But the more I listen to it, the more ‘Rose Marie’ is getting under my skin. It’s simple, it’s heartfelt, it’s kinda cute. There’s another fade, rather than a bombastic finale: a long drawn out note and a piano refrain. 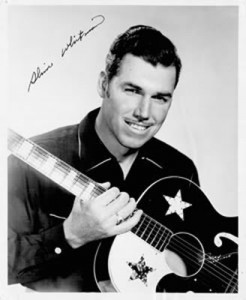 It’s not a bad way to claim your sole chart-topper – double figures then out – though Slim Whitman did have a handful of other hits. Pictures of him show a very dapper looking pseudo-cowboy with a natty little moustache. It almost goes without saying, by now, that he lived to a ripe old age: dying at ninety in 2013. ‘Rose Marie’ itself (herself?) dates from far earlier than 1955 – from a 1924 opera of the same name, written by none other than Oscar Hammerstein II. And that, fact fans, is that.